2 Years of Mystery: What Happened to Missing Plane MH370 and the 239 People Onboard?

(ABC News) — It’s been exactly two years since Malaysia Airlines flight MH370 vanished, leaving the families of its 239 passengers and crew devastated — and desperate for answers.

They may never get them.

Investigators remain perplexed about what happened on the Boeing 777, which Malaysian Prime Minister Najib Razak has said likely “ended” in the Indian Ocean. 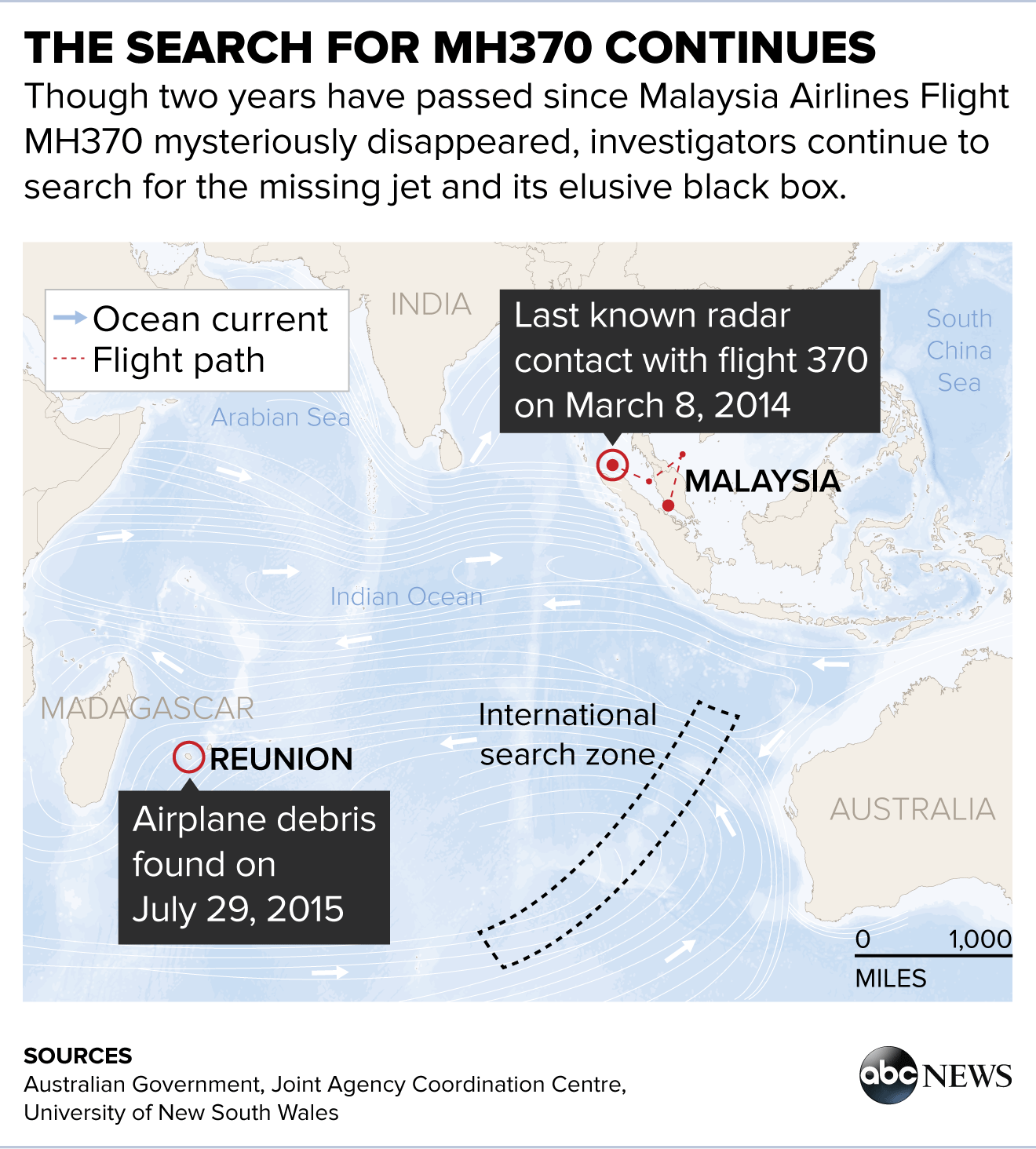 The jet, bound for Beijing, took off from Kuala Lumpur International Airport shortly after midnight, at 12:41 a.m. local time.

Two minutes later, at 1:21 a.m., the jet’s transponder, which communicates location information, was also switched off.

Those two separate actions — turning off the data transmission system and the transponder — suggest that someone may have been alive and conscious inside the cockpit.

Bolstering this hypothesis is radar data, which shows that four minutes after the transponder shut off, the plane deviated from its planned route, doubling back on itself and flying back over Malaysia, then north along the Malacca Strait, until it eventually dropped off Malaysian radar.

According to rudimentary satellite data — the only data available, since the data system and transponder had been shut off — the aircraft continued flying for about six hours, until it likely ran out of fuel over the Indian Ocean at just after 8:19 a.m. Malaysia time.

In the frantic days following the plane’s disappearance, first responders began scanning the South China Sea, then widened the search zone to a staggeringly large 23,000-square-mile swath of land and sea centered around Malaysia. Eventually, after a more thorough analysis of satellite data, the search was expanded to a 46,000-square-mile swath of the Indian Ocean, where investigators scoured the sea for “pings” from the jet’s black box, which records audio from the flight deck and data from the flight computers.

At the request of the Malaysian government, Australian authorities are now leading the search for the missing plane and its 239 occupants.

The search area includes depths of over six miles amid underwater mountain ranges, some of the world’s most inhospitable terrain.

The black box has long since run out of battery, but searchers equipped with high-tech detection equipment continue to comb tens of thousands of square miles.

The underwater search has turned up a 200-year-old shipwreck, but no signs of the missing airliner.

The first piece of debris, a barnacle-encrusted flaperon, washed ashore on a small French island near Madagascar in July 2015, almost a year and a half after the ill-fated jet disappeared. It was later sent to Toulouse for forensic analysis and confirmed to be part of MH370 by Malaysian authorities.

According to investigators, the location of the debris, coupled the patterns of the Indian Ocean’s currents, confirm that the Australians are likely searching in the right place.

Six months later, an American blogger discovered a piece of what appears to be a Boeing 777 on a sandbar in Mozambique. Officials are working to confirm that the piece comes from MH370, the only missing Boeing 777 in that part of the world.

Investigators are set to complete the investigation of the search zone this summer, when the funding runs out. But if they fail to unearth the plane, authorities from Malaysia, Australia and China will hold a meeting on how to move forward.