The one count of disorderly conduct is a felony, officials told ABC News.

“Empire” actor Jussie Smollett has been charged with felony disorderly conduct for filing a false report after allegedly staging the attack against himself in Chicago, police and the state attorney’s office confirmed to ABC News.

The charge of felony disorderly conduct carries a penalty of one to three years in jail, according to the criminal statute.

“Detectives will make contact with his legal team to negotiate a reasonable surrender for his arrest,” Chicago police spokesman Anthony Guglielmi said on Twitter.

Smollett will appear for a court hearing in a Cook County courtroom Thursday at 1:30 p.m., officials said.

Smollett’s attorneys have not commented on the charge.

After weeks of investigation into Smollett’s claim of being attacked last month by two men who shouted racist and homophobic slurs while physically beating him and leaving him with a rope tied around his neck, the Chicago Police Department on Wednesday afternoon officially classified Smollett as a suspect in an ongoing criminal investigation for filing a false report.

The announcement, in a tweet from the Chicago Police Department’s verified account, represents another stunning twist in an investigation that has seen more than its share of such developments.

The tweet also announced that detectives are presenting evidence to a grand jury.

Meanwhile, in yet another development in the case, video of what appears to be two brothers — who are cooperating with authorities and have told police that Smollett paid them to buy materials including masks and rope, and stage the attack, according to sources — purchasing the items at an area hardware story has been obtained by Chicago ABC station WLS. News of the video was first reported by CBS Chicago station WBBM.

While Chicago police officials confirmed to ABC News on Wednesday that authorities are maintaining a dialogue with Jussie Smollett’s attorneys, they remain anxious to re-interview the actor himself.

“We are hopeful that we’ll have a chance to ask the questions that we have,” Guglielmi said.

“It doesn’t matter what the investigation shows,” Guglielmi said. “If you have information that’s helpful to law enforcement, it behooves you to contact authorities and share that information. We have been very diplomatic and have been working with him and his attorneys. We got information, and that’s what we want to run by him.”

If Smollett does not come in to speak with police, he said, “We’re going to go with other methods to create a culture of accountability.”

Later Wednesday, an official briefed on the Smollett investigation confirmed to ABC News that attorneys representing Smollett met with police and prosecutors in Chicago today. Lawyers and police would not immediately detail the substance of the discussion.

The CPD’s latest public stance comes after two federal officials confirmed to ABC News on Tuesday that the FBI and the U.S. Postal Inspection Service are investigating whether Jussie Smollett played a role in sending a threatening letter addressed to him at the Chicago studio where “Empire” is filmed, prior to the alleged Jan. 29 attack.

The letter, which was sent Jan. 22, is currently in an FBI crime lab for analysis, one of the sources said.

The allegation concerning the alleged attack and the letter — made by brothers Olabinjo and Abimbola Osundairo, who are cooperating with investigators in the probe — has not been officially confirmed.

The Osundairo brothers have also told investigators that Smollett paid them to help him orchestrate and stage the Jan. 29 attack that Smollett said occurred near his Chicago apartment, sources said. Police have not independently verified these allegations and no one has been charged in connection with the case.

“As a victim of a hate crime who has cooperated with the police investigation, Jussie Smollett is angered and devastated by recent reports that the perpetrators are individuals he is familiar with,” Smollett attorneys Todd Pugh and Victor Henderson said in a statement Saturday. “He has now been further victimized by claims attributed to these alleged perpetrators that Jussie played a role in his own attack. Nothing is further from the truth and anyone claiming otherwise is lying.” 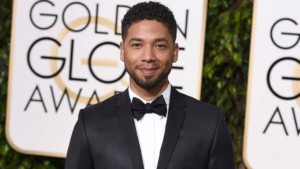 Smollett told police that on Jan. 29, he was walking on a street near his apartment around 2 a.m. when he was set upon by two men. The attackers allegedly shouted racist and homophobic slurs before hitting him, pouring “an unknown chemical substance” on him —- possibly bleach -— and wrapping a rope around his neck, he told detectives.

On Tuesday, a previously unreported misdemeanor complaint about Smollett related to an arrest for driving under the influence in 2007 surfaced in an Associated Press report. According to the complaint, Jussie Smollett told police his name was Jake Smollett, his younger brother, and signed Jake’s name on the written promise to appear in court.

Smollett was charged with false impersonation, driving under the influence and driving without a valid license. He pleaded no contest and completed an alcohol education program, the AP reported.

With Thanksgiving days away, the CDC urges Americans not to travel