The new policy largely requires service members and those wishing to join the military to adhere to the standards associated with their biological sex.

Service members diagnosed with gender dysphoria, defined as “a marked incongruence between one’s experienced/expressed gender and assigned gender … associated with clinically significant distress and impairment of functioning,” will no longer be allowed medical surgeries for gender transition unless they are currently in the process of receiving medical treatment. And transgender individuals who have received hormones or medical surgery related to their transition are now barred from joining the military, even if they can prove stability in their preferred gender. 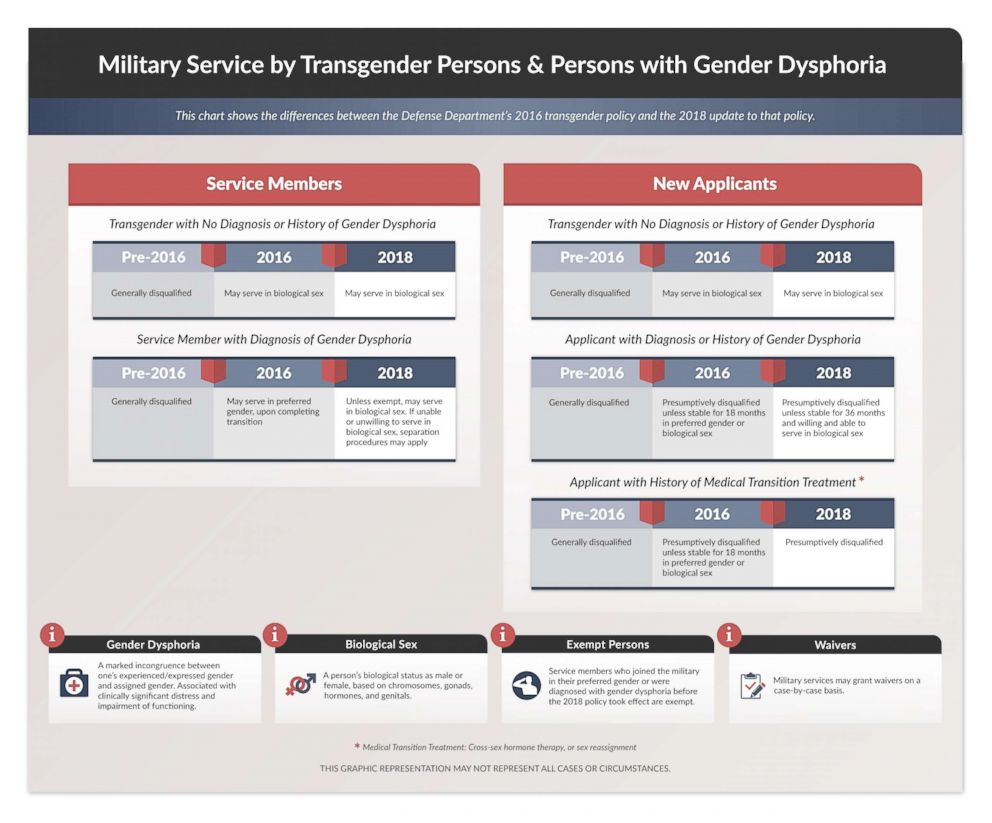 (Department of Defense) A graphic released by the Pentagon shows how individuals will be impacted by the new transgender policy.

The Pentagon asserts that the new policy is not a ban on transgender individuals, saying “all persons will continue to be treated with dignity and respect.”

A string of lawsuits were filed after Trump called for the ban in July 2017. He has not tweeted about the issue since.

After consultation with my Generals and military experts, please be advised that the United States Government will not accept or allow……

A federal judge lifted the final injunction of the ban last month, allowing the Pentagon to proceed with its implementation of the new policy. In the meantime, four outstanding lawsuits will proceed in courts across the country with the plaintiffs arguing the ban is unconstitutional.

In preparation for the policy to take effect on Friday, a Pentagon spokesperson told ABC News that fact sheets have been provided to military medical providers, service members, applicants, commanders, recruiters and to those in the human resources field.

Transgender service members who were serving in their preferred gender prior to Friday will be grandfathered in under the Obama administration policy, which allowed transgender individuals to serve openly.

“There’s transgender people who have been scrambling to try to hurry up, come out and begin the transition process so that they can be included in this so-called grandfathered group,” said Shannon Minter, one of the lead attorneys for two of the lawsuits filed against the policy. “So that has been a source of enormous stress and anxiety.”

Minter, a transgender man and the Legal Director for NCLR, described transgender service members as in a “state of despair” and fear as the new policy is implemented. He said the military will lose skilled, highly qualified individuals from service because of their gender identity and that the new policy could “encourage bias and discrimination.”

“This is absolutely ‘Don’t Ask, Don’t Tell’ for transgender people,” Minter told ABC News, referring to the Pentagon’s policy in the 1990s and early 2000s that banned gay and lesbian service members from serving openly in uniform.

In a message to sailors in advance of the new policy, the Navy said people were permitted to “live socially” in their preferred gender while not on duty, as long as they conform to the standards associated with their biological sex while in uniform.

“There is no policy that prohibits the ability of a service member to express themselves off-duty in their preferred gender,” officials said in a recently released Navy administrative message, according to Military.comwhich obtained the guidance. “Appropriate civilian attire, as outlined in the uniform regulations, will not be determined based on gender.”

Yet the Pentagon has said the policy doesn’t require transgender service members to conceal their gender identity. 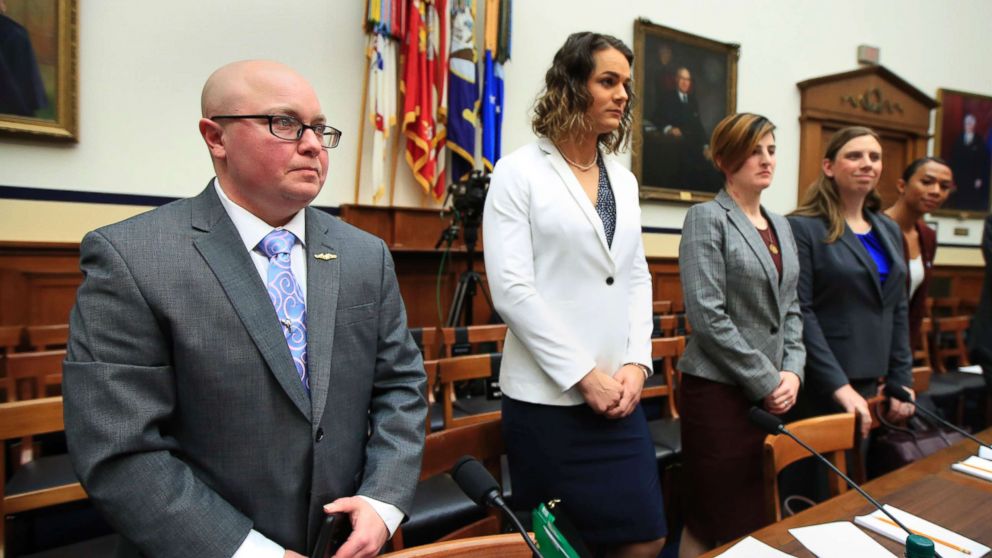 The Pentagon asserts that about 9,000 service members self-identify as transgender.

In a hearing earlier this year, a top defense official told Congress that the Obama administration policy would “degrade military readiness” in the long term. But the four service chiefs of the Army, Navy, Air Force and Marine Corps have testified publicly that the presence of transgender service members has had no effect on unit cohesion, discipline or morale — a sentiment echoed by the active duty transgender service members.

Defense officials were asked by reporters last month for the data that shows transgender individuals have a negative effect on military readiness and unit cohesion, but officials conceded that it doesn’t exist because the Pentagon doesn’t track transgender service members. Instead, officials pointed to the panel of experts assembled by former Defense Secretary James Mattis who used their military and professional judgment to make policy recommendations.

The full transgender policy for military service is available here.