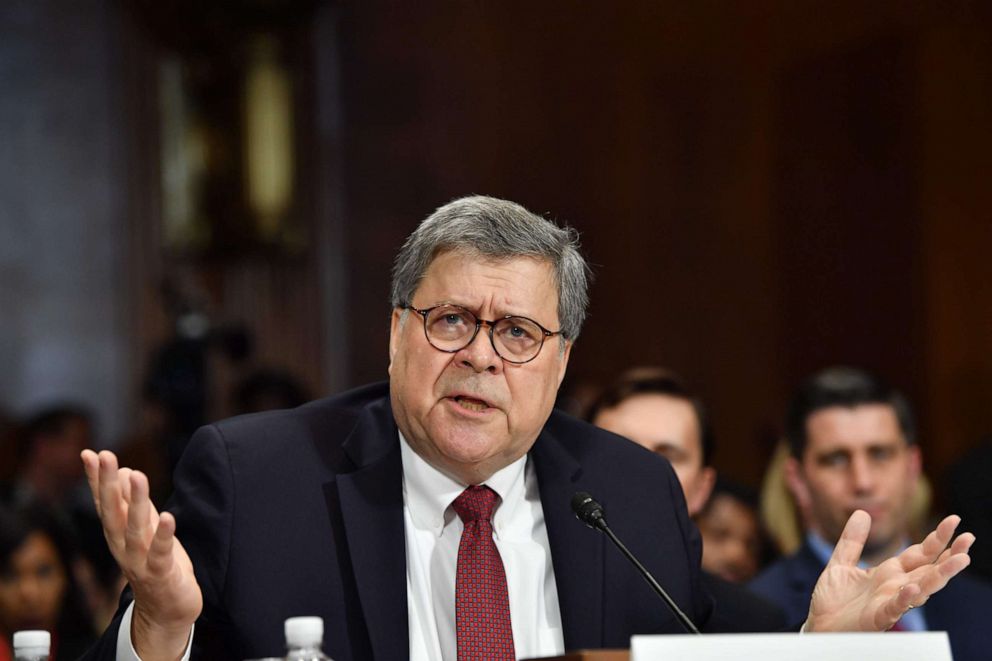 By BENJAMIN SIEGEL and KATHERINE FAULDERS

ABC News – President Donald Trump on Wednesday asserted executive privilege concerning the full, unredacted report from special counsel Robert Mueller just as Democrats on the House Judiciary Committee, led by chairman Rep. Jerry Nadler, were voting to hold Attorney General William Barr in contempt of Congress for not turning over the unredacted report and underlying materials in response to a committee subpoena.

“Faced with Chairman Nadler’s blatant abuse of power, and at the Attorney General’s request, the President has no other option than to make a protective assertion of executive privilege,” White House press secretary Sarah Sanders said in a statement.

“It is sad that Chairman Nadler is only interested in pandering to the press and pleasing his radical left constituency. The American people deserve a Congress that is focused on solving real problems like the crisis at the border, high prescription drug prices, our country’s crumbling infrastructure, and so much more,” Sanders said.

The Justice Department explained its reasoning in a letter Assistant Attorney General Stephen Boyd sent to Nadler just as the hearing was getting underway.

The contempt vote and the executive privilege assertion are the first moves in a process to censure the attorney general and fight for the documents in court.

Nadler, D.-N.Y., called the impasse “a constitutional crisis” in an interview on CNN Wednesday morning.

“If allowed to go unchecked, this obstruction means the end of congressional oversight. No person—and certainly not the top law enforcement officer in the country—can be permitted to flout the will of Congress and to defy a valid subpoena,” Nadler said later after the hearing began.

Republicans accused Democrats of rushing to condemn Barr in an effort to discredit the attorney general as he begins a review of the origins of the Russia investigation supported by the president and some Republicans.

Rep. Doug Collins, R-Ga., the top Republican on the panel, said Democrats were moving ten times faster to condemn Barr than Republicans did to hold then-Attorney General Eric Holder in contempt of Congress over a subpoena for DOJ documents in 2012.

He also claimed Democrats were frustrated with Mueller’s findings, and that the special counsel “did not produce the material or conclusions they expected to pave their path to impeaching the president.”

The Justice Department had warned Tuesday night that it would ask Trump to invoke executive privilege over the full Mueller report if Democrats moved forward with contempt proceedings.

“Unfortunately, the Committee has responded to our accommodation efforts by escalating its unreasonable demands and scheduling a committee vote to recommend that the Attorney General be held in contempt of Congress,” the Justice Department wrote in a letter to Nadler on Tuesday night.

Nadler responded in a statement Tuesday night, saying “in the middle of good faith negotiations with the Attorney General, the Department abruptly announced that it would instead ask President Trump to invoke executive privilege on all of the materials subject to our subpoena. This is, of course, not how executive privilege works. The White House waived these privileges long ago, and the Department seemed open to sharing these materials with us earlier today. The Department’s legal arguments are without credibility, merit, or legal or factual basis.

Democrats, frustrated with Barr’s handling of Mueller’s report and his initial description of the special counsel’s findings in the probe of Russian meddling in the 2016 election, have increasingly trained their fire on the attorney general.

They have pushed for access to the full report and underlying evidence gathered by Mueller “to determine how to best move forward with oversight, legislation, and other constitutional responsibilities,” Nadler said in a statement after the Justice Department missed a committee deadline to turn over the materials earlier this week.

The Justice Department has pushed back on Democrats’ demands and instead offered to make an unredacted version of the Mueller report available to a small group of congressional leaders for review at a Justice Department facility.

Negotiations between the Justice Department and Nadler’s staff on Tuesday fizzled, with both sides preparing for a contentious committee meeting Wednesday morning after Democrats dismissed the Justice Department’s offer to allow more staffers to view the report, without providing access to the full committee.

The committee is sparring with the administration on several fronts.

It’s unclear whether he’ll still comply with the committee’s subpoena for his testimony on Capitol Hill later this month.

The committee is expected to approve the measure to hold Barr in contempt, which would then need approval from the full House. The resolution would refer the matter to the U.S. Attorney of the District of Columbia, a Trump appointee in the Justice Department unlikely to pursue the matter. Democrats are also considering a separate action to seek enforcement of their subpoena in civil court, which could lead to a years-long legal fight.