Academy Award-nominated actress Felicity Huffman appeared in Boston federal court Monday and pleaded guilty to a charge stemming from the massive “Varsity Blues” college entrance scandal that ensnared dozens of parents nationwide who prosecutors say lied and bribed to get their children into elite schools.

Huffman, 56, agreed to plead guilty to a charge of conspiracy to commit mail fraud and honest services mail fraud.

Through tears, Huffman acknowledged she was guilty of paying $15,000 to arrange for an college entrance exam proctor to correct her daughter’s answers and for her daughter to be allowed more time to take the test.

In exchange for her plea, federal prosecutors consented to recommend a sentence of four months imprisonment, a year of supervised release and a $20,000 fine.

In a statement last month, Huffman said she is prepared to accept her punishment.

“I am pleading guilty to the charge brought against me by the United States Attorney’s Office,” Huffman said in her statement. “I am in full acceptance of my guilt, and with deep regret and shame over what I have done, I accept full responsibility for my actions and will accept the consequences that stem from those actions.”

The actress — famous for her Academy Award-nominated role in the 2005 movie “Transamerica” and for playing one of the main characters in the ABC television show “Desperate Housewives” — allegedly gave $15,000 to William “Rick” Singer, who prosecutors identified as the ringleader of the nationwide scam, “to participate in the college entrance exam cheating scheme on behalf of their oldest daughter,” court documents allege. 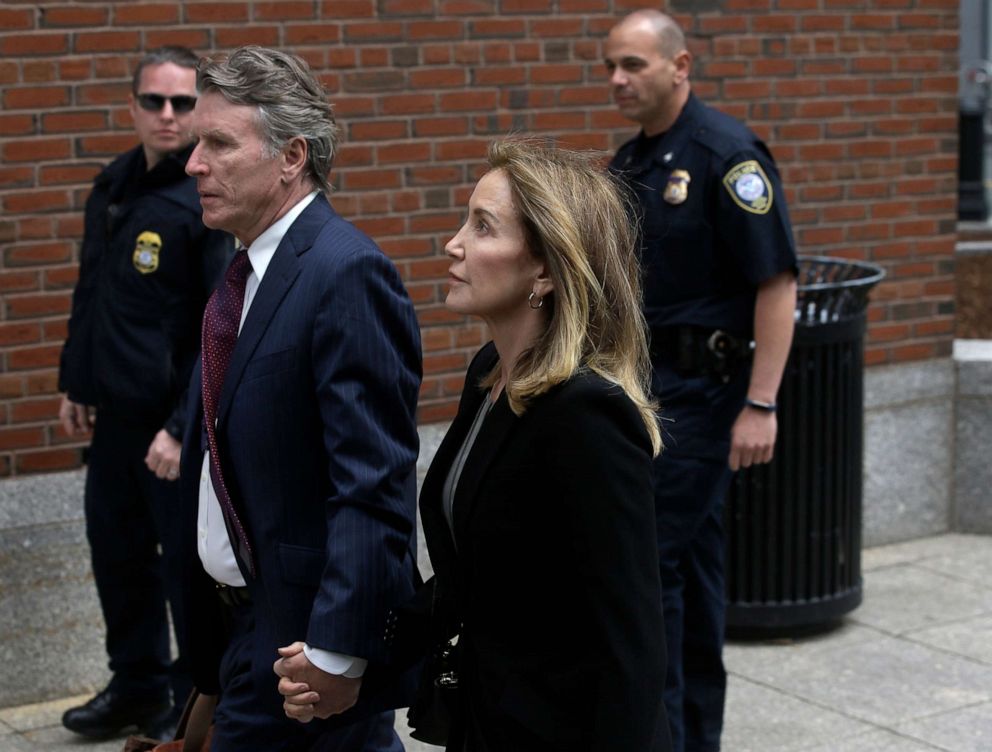 Felicity Huffman arrives with her brother Moore Huffman Jr., at federal court, May 13, 2019, in Boston, where she is scheduled to plead guilty to charges in a nationwide college admissions bribery scandal.

Felicity Huffman arrives with her brother Moore Huffman Jr., at federal court, May 13, 2019, in Boston, where she is scheduled to plead guilty to charges in a nationwide college admissions bribery scandal.

Huffman said in court Monday that she had no knowledge that Singer allegedly paid Igor Dvorskiy, a test administrator for the College Board and ACT, and Mark Riddell, who allegedly took or rigged test scores for students, to facilitating cheating scam on behalf of her daughter.

“But everything else Mr. Rosen said I did I did,” Huffman said in court, referring to assistant U.S. Attorney Eric Rosen, who outlined the charge against her.

Prosecutors said Huffman helped facilitate the scheme by having her daughter diagnosed with a learning disability, an excuse that allowed girl extra time to take her SAT exam.

Crying in court, Huffman sought to clarify that a neuropsychologist who diagnosed her daughter with a learning disability had been seeing her since she was 8 years old and had nothing to do with the scheme.

The agreement Huffman reached with prosecutors requires her to relinquish her right to appeal both her conviction and her sentence. In exchange, the government agreed to recommend the lesser sentence and to not bring additional charges.

“There is a trade here. They’ve given up something,” U.S. District Court Judge Indira Talwani told Huffman, referring to federal prosecutors.

Huffman was ordered to return to court on Sept. 13 to be sentenced.

The actress claimed in her statement last month that her daughter “knew absolutely nothing about my actions, and in my misguided and profoundly wrong way, I have betrayed her.”

Huffman and her husband, actor William H. Macy, later made arrangements to pursue the scheme a second time, for her younger daughter, before deciding not to do so, court documents allege. Macy was not charged in the scam.

On March 13, federal prosecutors announced that 50 wealthy people, including chief executive officers of major companies and a partner in a New York City law firm, were charged in the largest college cheating scam ever prosecuted by the U.S. Department of Justice.

Also pleading guilty Monday was Devin Sloane, a Los Angeles businessman who paid $250,000 to get his son admitted to USC as a water polo recruit even though the teen never the sport. Prosecutors detailed the lengths Sloane went to photograph his son wearing water polo gear and how he got a graphic designer to make the photos look legitimate.

Those indicted in the investigation, dubbed “Operation Varsity Blues,” allegedly paid bribes up to $6.5 million to get their children into elite colleges, including Yale, Stanford, Georgetown and the University of Southern California, federal prosecutors said.

Another well-known actress indicted in the scam is Lori Loughlin, best known for her role as Aunt Becky in the ABC sitcom “Full House.”

Loughlin, 54, and her husband, fashion designer Mossimo Giannulli, 55, allegedly agreed to pay Singer “bribes totaling $500,000 in exchange for having their two daughters designated as recruits to the USC crew team — despite the fact that they did not participate in crew — thereby facilitating their admission to USC,” according to the indictment.

Both were initially charged with conspiracy to commit mail fraud and honest services mail fraud.

When Loughlin and Giannulli declined to accept a plea deal in April, federal prosecutors filed an additional charge of conspiracy to commit money laundering against them.

A superseding indictment unsealed in April alleged the couple and 14 other parents conspired to “conceal their fraud scheme by funneling bribe and other payments through the facade” of the Key Worldwide Foundation, a sham charity established Singer.

Loughlin and Giannulli have pleaded not guilty to the charges.

Singer has already pleaded guilty in a Boston federal court to charges of racketeering conspiracy, money laundering conspiracy, conspiracy to defraud the United States and obstruction of justice. He’s scheduled to be sentenced on June 19.

Riddell, an alumnus of Harvard University, played a pivotal role in the scheme, taking the ACT and SAT for the students whose parents conspired with Singer to pay to help secure their admission into prestigious schools.