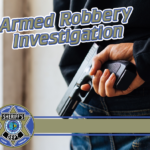 Lexington County Sheriff Jay Koon said the victims were waiting at the dock to load a boat when the suspects approached them from the woods.

The driver was assaulted while another teen held the passengers in the backseat at gunpoint, Koon said.

An undisclosed amount of money was stolen.