(ABC News)- As the Trump administration dismisses concern from some economists that the U.S. economy is heading for a recession, the Congressional Budget Office estimates the federal deficit will grow to $960 billion this year before climbing above $1 trillion in 2020 — two years earlier than a projection earlier this year.

The non-partisan agency periodically publishes reports that present projections of what federal deficits, debt, revenues and spending — and the economic path underlying them — would be for the current year and for the next decade under existing laws covering taxesand spending.

In its fresh report, the CBO warns that annual deficits will soon increase above the average over the past 50 years.

“Although both revenues and outlays grow faster than GDP over the next 10 years in CBO’s baseline projections, the gap between the two persists,” the CBO noted in its summary statement of its report. “As a result of those deficits, federal debt held by the public is projected to grow steadily, from 79 percent of GDP in 2019 to 95 percent in 2029 — its highest level since just after World War II.”

“We’ve been talking about indexing for a very long time … we’re always looking at the capital gains tax, payroll tax,” he adds when asked about potential tax cuts https://t.co/i3AO0tFVgH pic.twitter.com/waxcaaVXWT

After enacting a bipartisan spending agreement early this month, the CBO’s estimate of the deficit for fiscal year 2019 grew by an additional $63 billion, while the 10-year cumulative deficit increased another $809 billion higher than an estimate released in May — totaling more than $12 trillion of deficits in the next 10 years. CBO’s baseline projections of primary deficits — deficits excluding net outlays for interest — for that period increased by a total of $1.9 trillion. 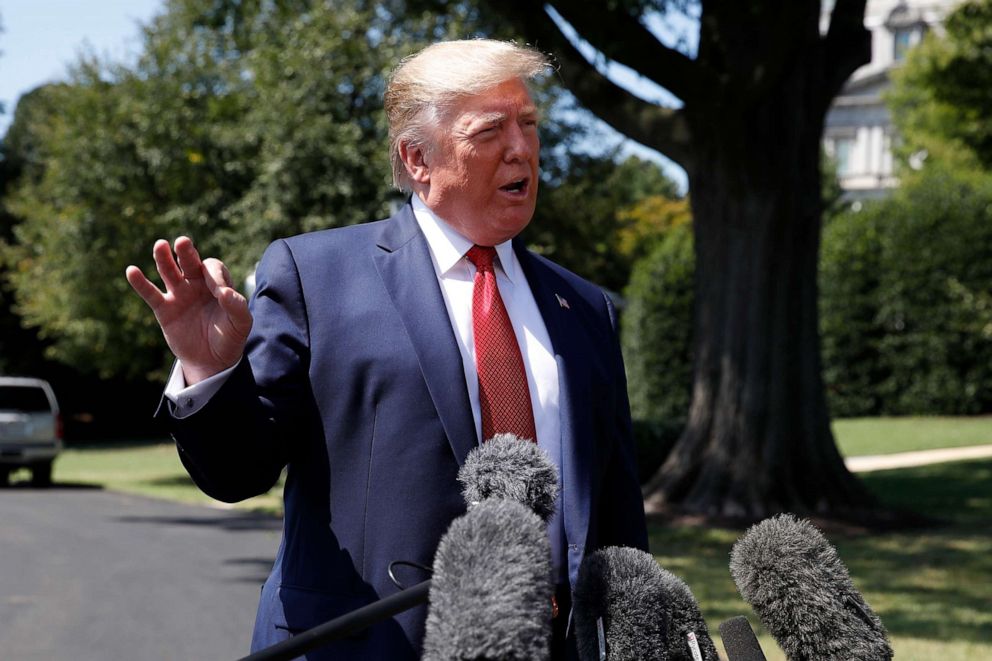 President Donald Trump speaks with reporters before departing on Marine One on the South Lawn of the White House, Wednesday, Aug. 21, 2019, in Washington.

President Donald Trump speaks with reporters before departing on Marine One on the South Lawn of the White House, Wednesday, Aug. 21, 2019, in Washington.

The CBO blames $1.7 trillion of that increase on the enactment of the Bipartisan Budget Act of 2019, and about $255 billion more due to the supplemental appropriations for disaster relief and border security this year.

“A range of developments, such as unexpected changes in international conditions, business confidence or productivity growth, could make economic outcomes differ significantly from our projections,” CBO Director Phillip Swagel said. “Prospective changes in trade policies add to the projections’ uncertainty.”

The CBO projects that the GDP will grow by 2.3% in 2019 as a result of a strong labor market, low unemployment and rising wages.

But by next year, the agency predicts the economy’s growth will fall below its long-term historical average, averaging just 1.8% GDP over the next four years.

“I’ve said it once and I’ll say it as many times as I have to, we HAVE to cut spending,” Sen. Rand Paul, R-Ky. tweeted.