(ABC News) — For the first time in 14 years, a manned dive has visited the RMS Titanic at the bottom of the North Atlantic Ocean.

The world’s most famous sunken ship rests 12,500 feet down on the icy seafloor, some 370 miles south of Newfoundland, Canada. This month, a deep-sea exploration team of experts and scientists completed five dives to the shipwreck over eight days, using a human-occupied submersible. They found the British passenger liner, the largest ship of its time, deteriorating rapidly.

The Titanic, which was 882 feet long and weighed over 53,000 tons, sunk in 1912 after slamming into an iceberg during its maiden voyage from Southampton, England, to New York City. Of the 2,224 passengers and crew estimated to be on board at the time, more than 1,500 died. The underwater wreckage was discovered 73 years later.

The last manned dive to the Titanic was in 2005, and this latest expedition was led by Victor Vescovo, an American private equity investor and retired naval officer who is the founder of exploration company Caladan Oceanic, Titanic historian Parks Stephenson, Rob McCallum, founder of specialist tour operator EYOS Expeditions, and a technical team from Triton Submarines.

They surveyed the decades-old wreckage and used special cameras to capture it on 4k footage. The rusting hulk is crumbling from salt corrosion, metal-eating bacteria and deep ocean currents. 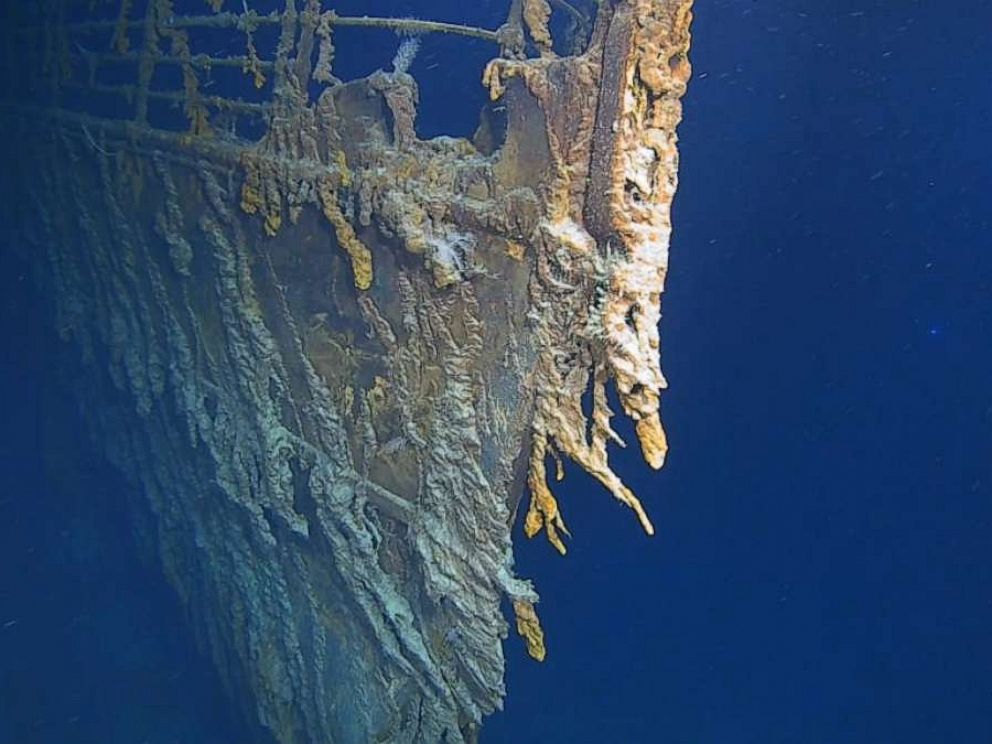 Stephenson said the “most shocking area of deterioration” was on the starboard side of the officers’ quarters, where the captain had his rooms. There, he said, the hull has begun to collapse.

“Captain’s bath tub is a favorite image among the Titanic enthusiasts, and that’s now gone,” Stephenson said in a statement Wednesday. “That whole deck hole on that side is collapsing taking with it the staterooms, and the deterioration is going to continue advancing.”

The team also performed photogrammetry passes on the Titanic’s remains, which will allow them to produce photo-real 3D models of the vessel so they can assess the current condition and project its future.

“The most fascinating aspect was seeing how the Titanic is being consumed by the ocean and returning to its elemental form while providing refuge for a remarkably diverse number of animals,” Patrick Lahey, president and co-founder of Triton Submarines, said in a statement Wednesday.

Lori Johnson, one of the scientists of the expedition, said the rate of deterioration will speed up as natural types of bacteria work “symbiotically” to eat away the iron and sulphur.

“The future of the wreck is going to continue to deteriorate over time,” Johnson said in a statement Wednesday. “It’s a natural process.”

The team will release the full results from the expedition alongside a documentary being made by Atlantic Productions, a London-based company that filmed the dives.

“It was extraordinary to see it all,” Vescovo said in a statement Wednesday. “The most amazing moment came when I was going along the side of the Titanic and the bright lights of the submersible reflected off a portal and came right back, it was like the ship was winking at me.”