According to a poll, Six in 10 say a recession is likely for the year 2020

(ABC News)- Six in 10 Americans say a recession is likely in the next year and as many are concerned about higher prices because of the trade war with China, helping to knock 6 points off Donald Trump’s job approval rating in the latest ABC News/Washington Post poll.

Trump fell from a career-high 44 percent approval in July to 38 percent now, a point off his career average, with 56 percent disapproving. His average rating since taking office remains the lowest on record for any modern president at a comparable point in his term, and he is the first never to have achieved majority approval. 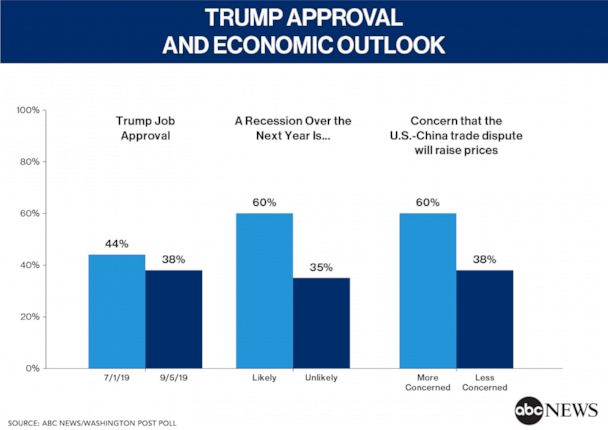 Trump has slipped by a slight 5 percentage points specifically on his handling of the economy, from 51 percent approval in midsummer to 46 percent now. Fewer – 35 percent – approve of his handling of trade negotiations with China, and 60 percent are concerned that the trade dispute will raise the price of things they buy.

Ratings of the U.S. economy overall, 56 percent positive, are down from 65 percent last fall in this poll, produced for ABC by Langer Research Associates. Most ominously, 60 percent see a recession as very or somewhat likely in the next year. That’s within sight of the 69 percent who said so in November 2007, in advance of the Great Recession.

In another measure, Trump gets far more criticism than credit for his economic stewardship. Americans by nearly a 3-1 margin, 43-16 percent, say his trade and economic policies have increased rather than decreased the chance of a recession in the next year.

Trump has slipped by a slight 5 percentage points specifically on his handling of the economy, from 51 percent approval in midsummer to 46 percent now. Fewer – 35 percent – approve of his handling of trade negotiations with China, and 60 percent are concerned that the trade dispute will raise the price of things they buy. 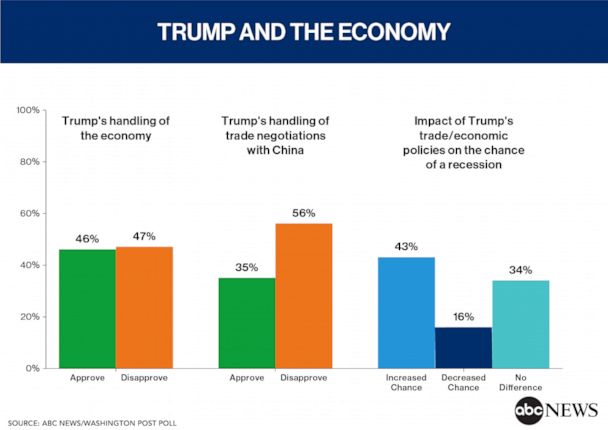 A statistical analysis called regression backs this result. Controlling for demographics, partisanship and political ideology, seeing a recession as more likely independently predicts lower approval for Trump, as do both being concerned about paying more because of the trade dispute with China and holding more negative views of the economy overall. Indeed, each of these alone, in its respective equation, is the single strongest predictor of Trump’s approval rating – more so than the customary prime factors in presidential approval, partisanship, ideology and race or ethnicity. 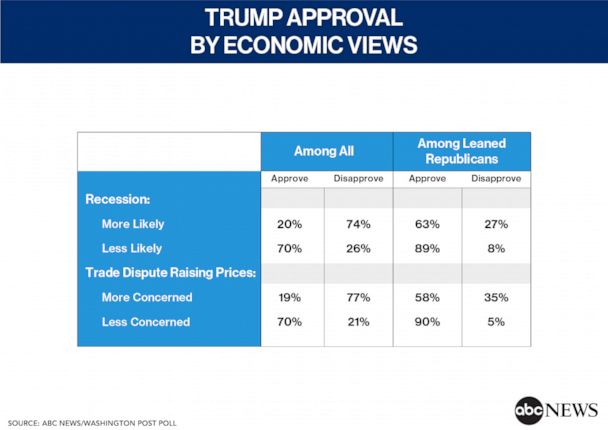 The president’s overall approval rating continues to vary widely among groups. Among the sharpest declines, he’s lost 10 points since July among urban residents, 9 points among college graduates and 8 points among women. (A broad gender gap remains; he has 47 percent approval among men, 30 percent among women.)

He’s also fallen just under 50 percent approval from whites – down a slight 6 points to 48 percent. That compares with 25 percent approval among Hispanics and just 10 percent among blacks, one of the country’s most Democratic-leaning groups.

Two other shifts this month make Trump appear increasingly isolated in a core support group, white men who don’t have a college degree. They give him 69 percent approval. But he’s lost 12 points among non-college white women, to 42 percent; and Trump is down 15 points among college-educated white men, to 34 percent, a new low. They’re now as critical of the president as are college-educated white women. 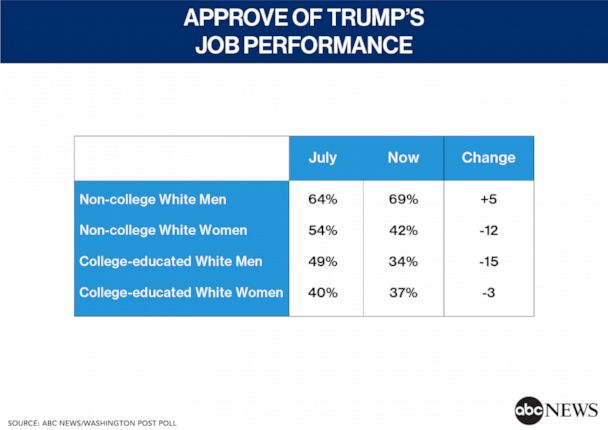 Lastly, Trump has 82 percent approval among Republicans, back near his career average after peaking at 87 percent in July. Marking the extent of polarization, his approval rating is 8 percent among Democrats. Among independents – often, though not always, swing voters in national elections – it’s 36 percent.

This ABC News/Washington Post poll was conducted by landline and cellular telephone Sept. 2-5, 2019, in English and Spanish, among a random national sample of 1,003 adults. Results have a margin of sampling error of 3.5 points, including the design effect. Partisan divisions are 28-24-37 percent, Democrats-Republicans-independents.

The survey was produced for ABC News by Langer Research Associates of New York, N.Y., with sampling and data collection by Abt Associates of Rockville, Md. See details on the survey’s methodology here.