Imelda dumps nearly 4 feet of rain on parts of Texas 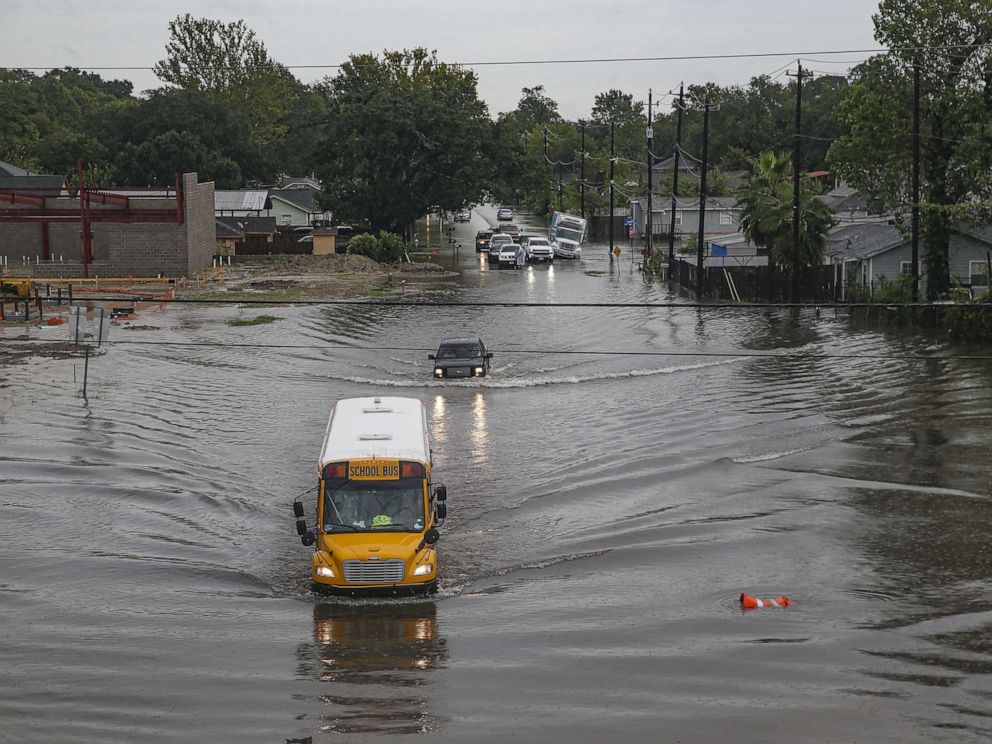 (ABC News)- Texas residents are grappling with the effects of Imelda after the storm dumped nearly four feet of rain on parts of the Lone Star State.

Imelda brought up to 43” of rain between Winnie and Beaumont in the last three days, most of it falling in just 24 hours.

In Houston, multiple barges struck the I-10 bridge over the San Jacinto River Thursday night, shutting down the I-10 freeway in both directions, reported Houston ABC affiliate KTRK.

Earlier, a man in Jefferson County was “electrocuted and drowned” while trying to move his horse, according to the sheriff’s office. The family of Hunter Morrison, the man killed, said he was not trying to rescue any people, as had been reported locally, and wanted to correct false reports.

A second death was reported in Harris County, which includes Houston, as a man drowned after driving his van into floodwaters and became submerged, according to the sheriff’s office.

Across the region, approximately 200 students were forced to spend the night at area schools when they were unable to get home due to flooding. About 20 students stayed the night at MacArthur High School, KTRK reported.

Gov. Greg Abbott on Thursday declared a state of disaster for 13 counties due to the effects of the storm.

National Weather Service flash flood watches and flood warnings continue for Houston and east to Lake Charles, Louisiana, because the ground is so saturated that it can’t handle any more rain — making flash flooding possible with as little as 1″ of additional rain.

Harvey brought 60” of rain to Texas two years ago, which remains the U.S. record for most rain from a tropical system.

On Thursday, Houston alone had 9.2” of rain, making it the wettest September day ever recorded in the city.

As of Friday morning, most of the rain had moved away from southeast Texas, but as the deep moisture continues to stream from the Gulf of Mexico in the wake of Imelda, more rain is possible in Houston and Beaumont.

Most of the rain from Imelda will combine with a cold front in the Midwest and bring heavy rain there, with up to 1” of rain forecast around Houston in the next 24 hours and into the weekend.

Elsewhere, a new storm system will move out of the Rockies and bring severe storms to the Upper Midwest and the northern Plains for the Dakotas, Nebraska and parts of Minnesota.

The biggest threat will be damaging winds, hail and a few tornadoes.

As this system moves east, heavy rain is also expected over the weekend in the Plains and the Midwest and into the Great Lakes, with flash flooding possible.

In the Atlantic, Jerry now a Category 2 hurricane with winds of 105 mph, as it begins to move north of the Leeward Islands.

The worst of Jerry will miss the islands, with just some rain and gusty winds possible in northern Leeward Islands later Friday.

By next week, Jerry will re-curve north and east, away from the U.S., but it could hit Bermuda as a possible Category 1 hurricane.

UNC football player with S.C. roots to be awarded after beating cancer battle

Holiday travel tips to help you save money