American family of 9, including 6 children in Mexico killed in torched, bullet riddled car

(ABC NEWS)— At least nine members of an American family, including six children, were killed in an attack in northern Mexico on Monday, the Mexican military has confirmed. 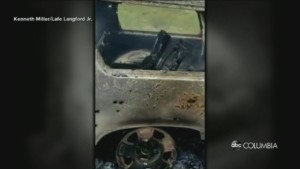 The family was ambushed by an armed group while traveling from Bavispe in Sonora state to the town of Galeana in Chihuahua state between 9:30 a.m. and 1 p.m. local time, according to Mexico’s security minister, Alfonso Durazo.

The area where the attack took place — less than 100 miles from the Arizona border — is of territorial dispute by several cartels, and it’s possible the family’s convoy of cars was mistaken for one of them, Durazo said at a press conference Tuesday morning.

Three women and six children were killed in the ambush, according to Durazo. Seven other children survived the massacre and were left injured, while another initially went missing.