Several states are beginning to lift COVID-19 restrictions despite concerns

Vermont, Texas and Georgia have decided to slowly reopen their economies.

ABC News – Amidst a contentious national debate over public health versus the economy, several states are beginning to lift stay-at-home restrictions in spite of continued reports of new coronavirus cases across the country.

President Donald Trump provided governors with a three-phase roadmap to reopening their economies. States need to demonstrate a two-week downward trend in new cases, insure that hospitals have enough beds for patients and adequate testing measures are in place.

Several health experts and local government officials, however, have expressed concern that it may be too early to loosen lockdown measures.

Some states have decided to gradually reopen their economies. 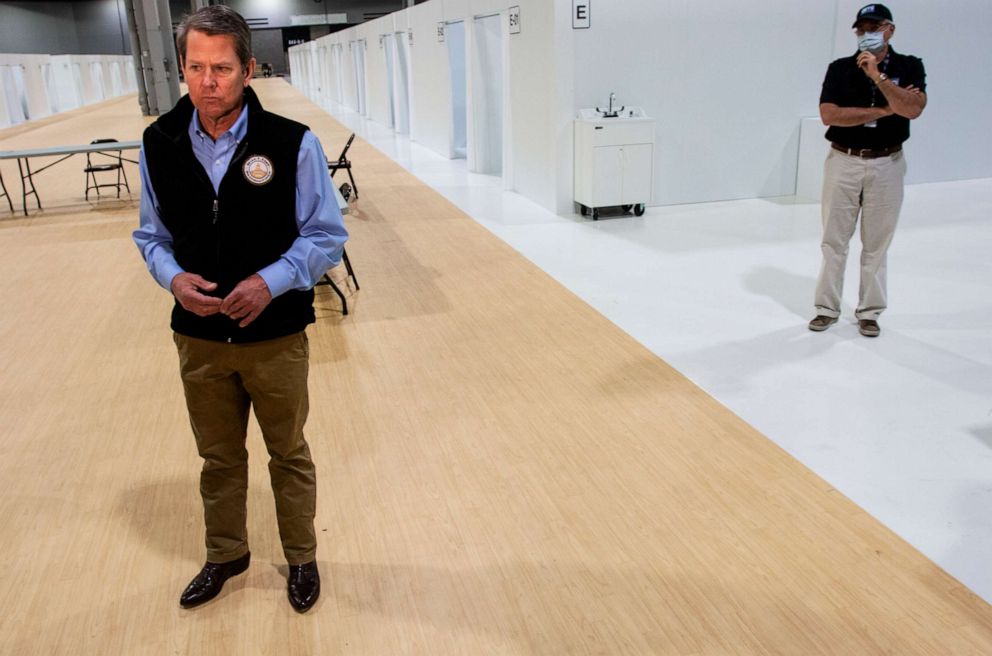 On Monday, Georgia Gov. Brian Kemp introduced plans “to incrementally and safely reopen sectors” of the economy based on optimistic numbers from the Department of Public Health.

Church services will be allowed to resume, but with strict adherence to social distancing.

Theaters, private social clubs and restaurant dine-in-services will reopen on April 27 and are also subject to social distancing. Bars, nightclubs and amusement parks are to remain closed.

Kemp’s announcement, however, has been met with criticism from local government officials who are wary of reopening the state too soon.

Atlanta Mayor Keisha Lance Bottoms told ABC affiliate WSB-TV that she was caught off guard by the governor’s announcement despite the fact that she has a good working relationship with Kemp. Bottoms said she is unaware of the data used by the governor to make his decision.

Stacey Abrams, the Georgia Democrat who lost to Kemp in 2020, tweeted that his decision was “dangerously incompetent” given the state’s rate of infection.

South Carolina Gov. Henry McMaster announced Monday that the state would issue a new executive order to allow most retail and department stores to reopen with the exception of hardware and home-improvement stores.

Businesses will now be allowed to operate under a 20% occupancy capacity, equivalent to five people per 1,000 square feet.

The state also removed restrictions on public access points to the state’s beaches, public piers, docks and wharfs, further delegating the authority to restrict access, if necessary, to local officials.

“In light of that in light of the common sense being shown by the great people of South Carolina, we are ready to take some steps that will help South Carolina assure that our economic health is as strong as our public health,” McMaster said.

McMaster also closed all nonessential businesses, making it near impossible for many local retail stores to generate any profits.

Although South Carolina was one of 11 states not to issue a state-wide stay-at-home order, three of the state’s largest cities, Charleston, Columbia and Mount Pleasant, all issued their own.

“Our goal was to cause the most damage possible to the virus. While doing the least possible damage at least permanent damage to our businesses,” McMaster explained. 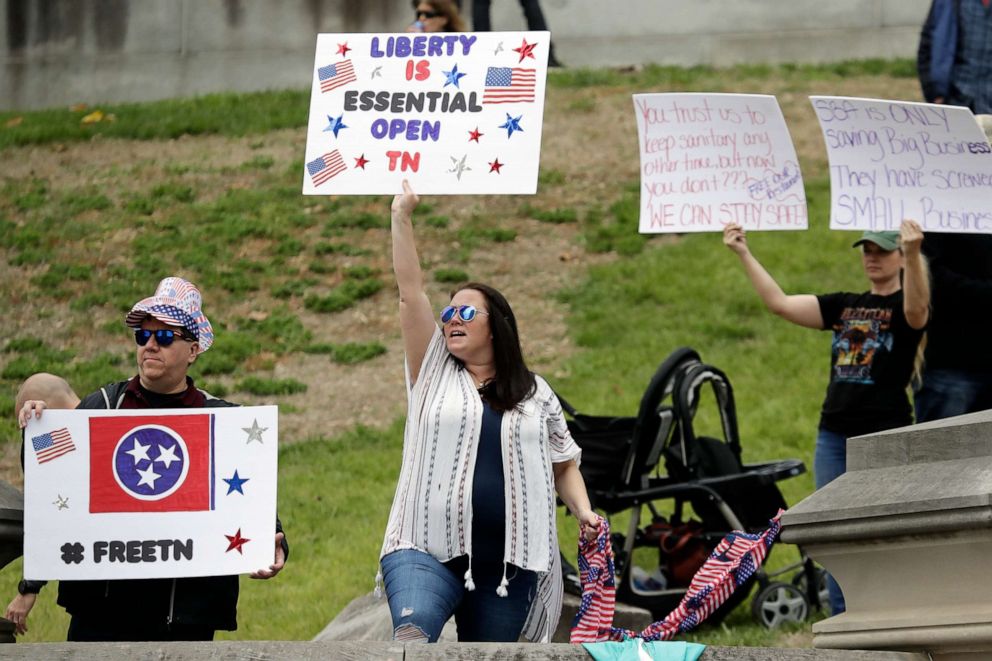 On Monday, Tennessee Gov. Bill Lee declared that the state’s stay-at-home order would expire on April 30 “with the vast majority of businesses in 89 counties allowed to re-open on May 1,” according to a statement from his office.

Which types of businesses slated to reopen first have yet to be determined.

“The economic difficulty that’s been created by this, it has been devastating to our state, and the sooner we can begin to change that picture, the better,” the governor said.

State parks will be allowed to reopen Friday, with the caveat that residents practice proper social distancing.

On Friday, Texas Gov. Greg Abbott issued a series of executive orders to begin the process of reopening Texas’ economy.

“We’re now beginning to see glimmers that the worst of COVID-19 may soon be behind us,” Abbott said.

Abbott announced the creation of a team of medical advisers and business leaders who will create strategies of ways to safely reopen businesses.

“They will work together to develop a medical architecture to comprehensively test and trace COVID-19 that will enable Texas to gradually and safely begin the process of returning to work and returning to other activities while we wait for the immunizations that will end the threat of COVID-19,” Abbott said.

The first step took place on Monday when the administration reopened all state parks. Visitors are required to wear face masks and practice social distancing. Groups are limited to five people or less.

On Wednesday, a limited number of nonessential medical surgeries will be allowed, providing that there are enough beds and personal protective equipment. On Friday, retailers will be allowed to offer “retail-to-go,” or curbside pickups to customers who have previously purchased products at retailers.

Additional openings will be announced April 27 “after further input from medical staff,” Abbott said. The lack of testing access, however, could delay the broader reopening of the economy. Universities and schools will stay closed through the remainder of the academic year. 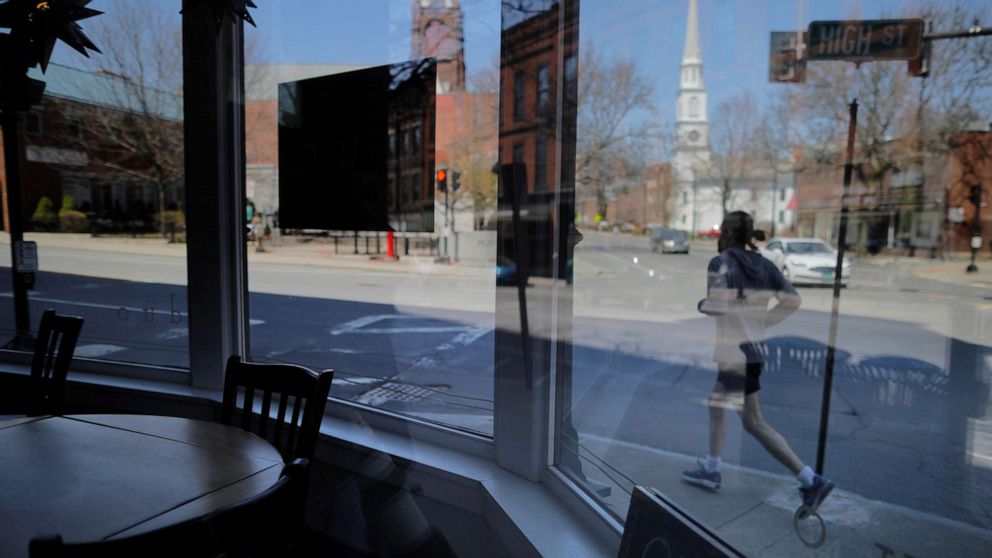 On Friday, Vermont Gov. Phil Scott announced that the state would adopt a phased approach to reopening the state.

“These forecasts show we can continue to slow the number of new COVID-19 cases if we continue to stay vigilant, meaning staying home, avoiding large gatherings, staying six feet away from others, using a cloth face covering when in public and washing our hands,” Scott said. “But what these trends also show is that with the right precautions, we can take small steps to get more Vermonters back to work and avoid a spike in cases that would put lives at risk.”

Although the state’s “stay home, stay safe” directive was extended through May 15, certain businesses have been allowed to open.

Employees are required to abide by the health and sanitation guidelines developed by the state, such as physical distancing and wearing non-medical cloth face coverings.

Commercial retail operations are now allowed to resume; however, there will be no in-store shopping and retailers are required to have the minimum number of employees needed to support curbside pick-up and delivery services.

Services rendered by a single worker, such as appraisers, realtors, attorneys, property managers, pet care operators, among others, can resume operations as long as no more than two persons, the service provider and the client, are present at one time.

“Micro-crews” of no more than two people for outdoor or construction jobs are also now permitted.