Dr. Anthony Fauci said the next two weeks are critical in containing the surge.

ABC News – Despite the nation’s top public health officials contradicting him, President Donald Trump continues to insist the novel coronavirus “is going way” — as he continues to push states to reopen their economies and ramps up his reelection campaign.

Even as the government’s top expert on infectious disease Dr. Anthony Fauci warned lawmakers Tuesday of the need to continue or increase strong precautionary measures to contain what he called a “disturbing surge,” Trump, speaking at a mega-church in the hot-spot state of Arizona packed with supporters not wearing masks, dismissed COVID-19 concerns.

“It is going away,” Trump said, calling coronavirus “the plague” and repeating that the surge in U.S. cases could be chalked up to an increase in testing.
Speaking to hundreds of “Students for Trump” activists, the president also repeated the racist term “kung flu” he had used most recently at his weekend rally in Tulsa, Oklahoma, and ticked off more nicknames, including “Wuhan” and “Chinese” virus to applause.

“I could give you nineteen or twenty names for that, right? Wuhan was catching on. Coronavirus, right? Kung flu. COVID-19. COVID. I said, ‘what is the nineteen?’ Some people cannot explain what the nineteen is in COVID-19. That is an odd name. I can give you many, many names,” Trump said. 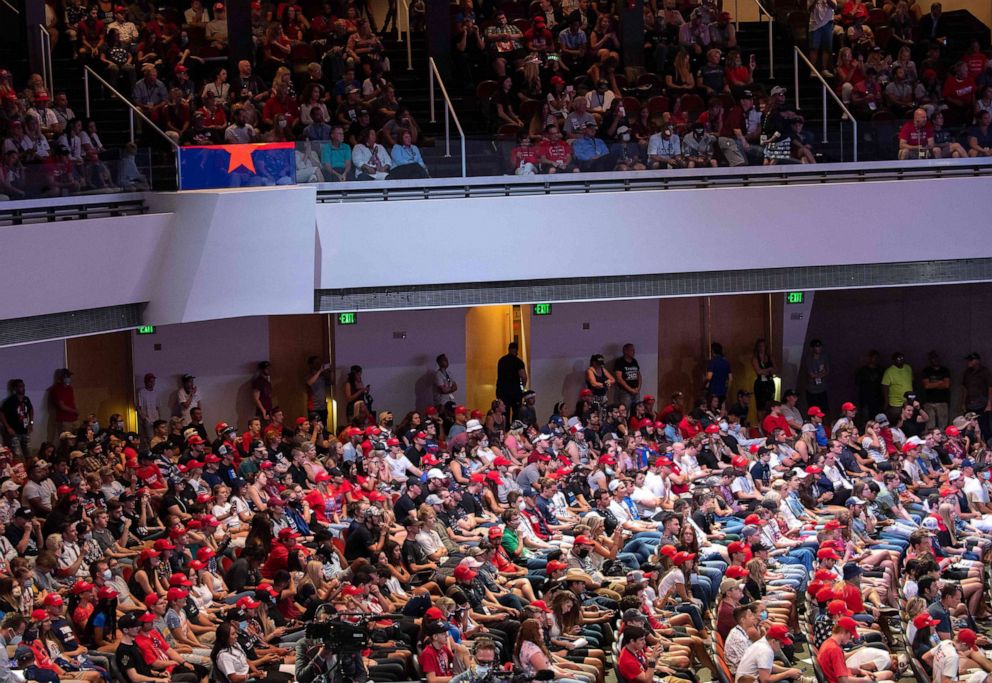 Trump will likely face more questions about his comments when he holds a White House news conference Wednesday afternoon.

Just hours before Trump spoke Tuesday, Fauci warned lawmakers about “disturbing surge” of cases in hot-spots states, naming the one Trump was visiting, and said “the next two weeks will be critical” in seeing whether the surge can be contained.

“Right now, the next couple of weeks are going to be critical in our ability to address those surgings that we are seeing in Florida, in Texas, in Arizona, and other states,” Fauci said.

Fauci and three other of the nation’s top officials tapped to end the pandemic, still warning of the threat of the virus, revealed they no longer seemed to have the president’s ear.

All of them said it had been more than two weeks since they spoke to President Trump — though they said they’re still in contact with Vice President Mike Pence.

Adm. Brett Giroir, a senior Health and Human Services official in charge of testing, told the committee at the end of the hearing, “I am very cautious and I still don’t sleep well at night because we have a long way to go.”

As the U.S. coronavirus case count and death toll surges in areas across the country, Trump is likely to address the disconnect between the advice of his top health officials and his campaign perrogatives in a Wednesday afternoon news conferences with the president of Poland.

Trump at Tuesday’s rally also railed against protesters toppling monuments and continued to push conspiracy theories around states promoting mail-in voting because of the pandemic, saying, “This will be in my opinion the most corrupt election in the history of our country.”

“Our country didn’t grow great with them. It grew great with you and your thought process and your ideology. The left-wing mob is trying to demolish our heritage, so they can replace it with a new oppressive regime that they alone control.”

At a rally in Tulsa, Oklahoma, over the weekend, Trump told supporters that he urged his staff to slow down testing. His aides suggested he was only joking, but Trump said later, “I don’t kid.”

ABC News’ Will Steakin contributed to this report.