(ABC NEWS) — Jayson Conner stands at the back of an open U-Haul on Houston Street in Manhattan, slinging a backpack over his right shoulder. He swings one over his left. His fiancé, Jeffrey Newman, hands him another, which he loops through both arms, letting it rest on his belly.

Each bag is stuffed with vital supplies for those in need of them most — New York City’s homeless — a population that, especially amid the COVID-19 pandemic, has been forced to face both the elements and the virus head on.

“People who are homeless, they feel invisible to begin with,” Newman told ABC News. “Like they don’t matter. And COVID-19 only magnified that. People treat them like the disease.”

“We wanted to be doing more,” Conner added. “I’m amazed how that little moment of humanity and compassion and dignity changes someone’s life.”

For the past several months, there’s been no safer place than home. But for many, “home” is not an option.

“The thing about these backpacks is, it gives people hope,” Conner said. “It’s not going to cure homelessness but it gives them the beginning start — of hope.” 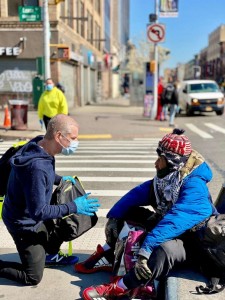 Image: Backpacks for the Street

He speaks from experience: Conner himself was homeless for two years.

“I know the pain that they’re going through,” Conner said as he stood with Newman in the cramped warehouse where they stock the bags in Jamaica, Queens. There might be more room to walk if the shelves weren’t stacked to the rafters.

“I know the embarrassment they’re going through… it hurts,” he said.

Reaching out, Newman wrapped his arm around Conner’s head, kissing his cheek. He met Conner before he had a bed of his own.

“I never thought of him as homeless,” Newman said. “I just thought of him as a really cool looking kid who liked to sleep on people’s sofas. So for me now — we’re out there and I’m thinking — that was him. And this could be him right now. This is someone’s mother, or brother, and that’s my partner out there. And God I would hope someone would help him the way we’re trying to help people. That gets me.”

Help here takes the shape of socks, protein-filled snacks (and sugary ones for those coming down from drug highs), feminine hygiene products, sewing kits, canned dog food for those with pets, cloth face masks and baby wipes in case there’s no shower nearby. Solar-powered chargers at a time when electric outlet access has been sparse.

“We take what we do very seriously,” Newman said. “We’re not making little goodie bags — we’re really thinking out what it is people need the most. It’s a labor of love.” 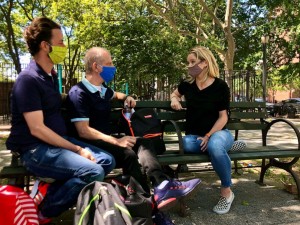 Newman has seen his partner overcome addiction and they’ve worked to overcome the stigma of HIV. It’s a fight that fuels their empathy now, they said. Even on COVID-19’s front line, immunocompromised people face greater risk.

“I can’t imagine anything that would stop us from doing what we do,” Newman told ABC News’ Sara Haines. “Look, you know what? HIV hasn’t killed me – didn’t kill me. 9/11 didn’t kill me. COVID sure the hell ain’t gonna kill me you know, and that’s the truth.”

Two years ago, they launched their nonprofit endeavors — “Together Helping Others” and “Backpacks for the Street.” They’ve welcomed donations and support from the likes of Bombas socks — to date receiving thousands of pairs — and received a grant from the TJX Foundation. The project has also strengthened their union.

“Helping people has brought us together more because we’re a team,” Conner said.

Fanning out with volunteers through the city streets, they hand the backpacks off one-by-one. They say they have distributed more than 4,400 bags since the COVID-19 crisis began.

“We’ve done about 45 gallons of hand sanitizer since March alone,” Conner estimated. “Six thousands masks at this point and we’re going to keep doing it. We are right there.” 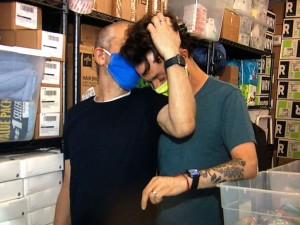 Christopher Webber told ABC News’ Sara Haines that the pandemic has cut off any chance of him getting off the streets. He had worked in the restaurant business but “I don’t know what I’m going to do next,” he said. “But I have optimism.”

He recently received one of the backpacks, pulling out the supplies one by one.

“Holy cow! Wow. It’s everything!” Christopher said. “You have no idea what this means to me,” he added, peeling down his mask to flick away a tear.

“We get to know these people, their stories,” Newman said. “At some point, you’re going to meet somebody that’s going to get into your soul.”

Local Experts speak out on Pandemic Precautions for the 4th