ABC News – The Supreme Court announced a major ruling on abortion, deciding that the Louisiana law should not stand.

The case, June Medical Services v. Russo, was a challenge to a Louisiana law that required abortion providers have admitting privileges with a nearby hospital — an agreement between a doctor and a hospital that allows a patient to go that hospital if they need urgent care.

Abortion providers argued this was an unnecessary requirement unrelated to health outcomes that only served to prevent them from being able to provide abortion care. Admitting privileges can be difficult for abortion providers to obtain as hospitals do not want to be associated with them due to the stigma and as abortion is a statistically safe procedure, requiring extremely limited numbers of patients to have to go to hospitals for care.

In fact, in 2016, the Supreme Court ruled, in Whole Woman’s Health v. Hellerstedt, that a nearly identical hospital admitting privileges law out of Texas caused an “undue burden” on patients seeking abortions after it caused roughly half of clinics in the state to shut down. In the 2020 opinion, Breyer called the Louisiana law “almost word-for-word identical to Texas’ admitting-privileges law.”

“This case is similar to, nearly identical with, Whole Woman’s Health. And the law must consequently reach a similar conclusion. Act 620 is unconstitutional,” Breyer wrote in conclusion on the June Medical opinion.

That 2016 case set what was supposed to be a precedent that laws like Texas’ that “‘do little or nothing for health, but rather strew impediments to abortion’ cannot survive judicial inspection,” Ginsburg wrote in a concurring opinion, referencing a lower court case.

Roberts had been on the dissenting side of the Texas Whole Woman’s case. In his concurring opinion with the majority on June Medical, Roberts explained that he still believed his 2016 opinion that “the case was wrongly decided,” but he joined the majority this time around because “the question today” is on “whether to adhere to [the Whole Woman’s case] in deciding the present case.” Essentially, Roberts based his decision not on his opinion on the law itself, but on the basic concept of precedent.

“The legal doctrine of stare decisis requires us, absent special circumstances, to treat like cases alike,” he wrote. “The Louisiana law imposes a burden on access to abortion just as severe as that imposed by the Texas law, for the same reasons. Therefore Louisiana’s law cannot stand under our precedents.” 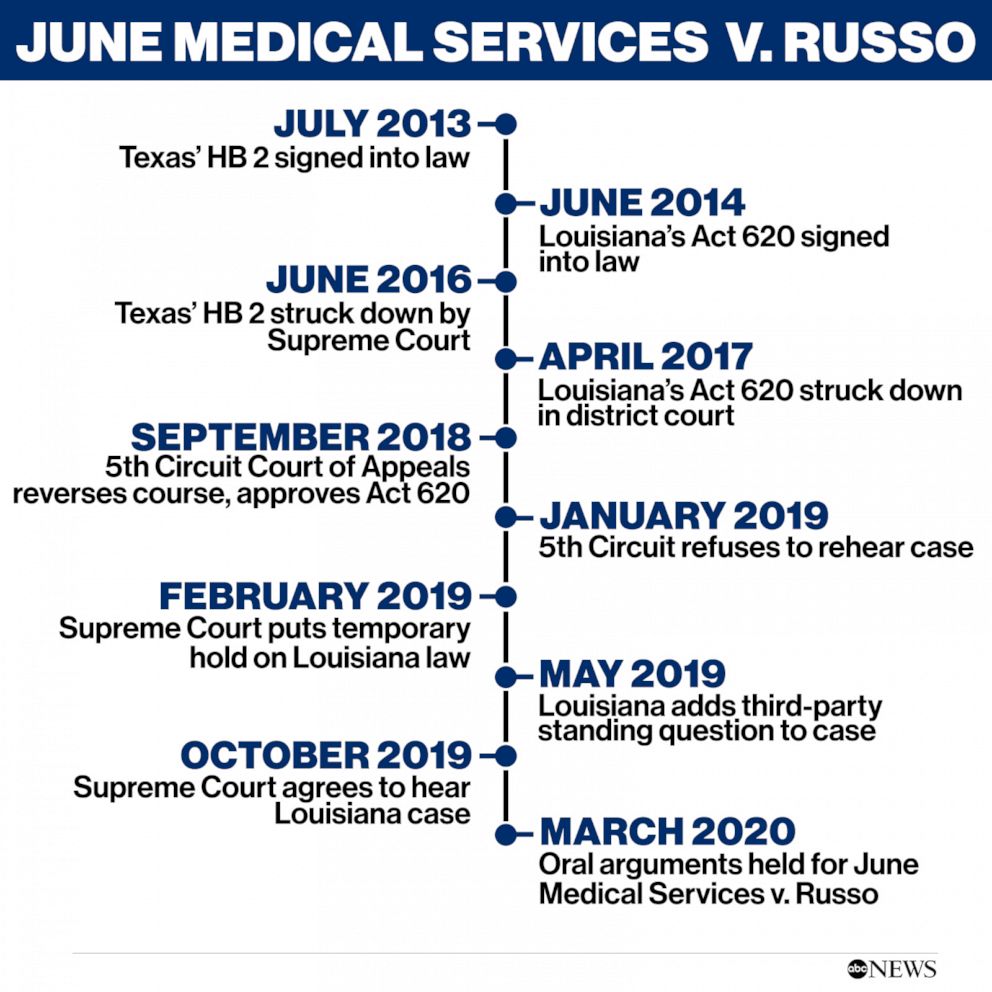 Since 2016, the Supreme Court’s makeup has changed. Justice Anthony Kennedy represented the swing vote on abortion in the 2016 case, then siding with the liberal-leaning justices. Following Kennedy’s retirement in 2018 and the death of Justice Antonin Scalia in 2016, their replacements — Neil Gorsuch and Brett Kavanaugh — are seen as more conservative.

In bringing the case to the Supreme Court, Louisiana added another challenge on, questioning what’s called “third-party standing,” which means that a third party — like an abortion provider — is allowed to argue on behalf of the person actually impacted — a patient.

While Roe v. Wade, the landmark 1973 case that declared abortion a protected right, included an individual patient challenging the law, every major abortion case since then has been presented by providers and clinics like Whole Woman’s Health, Planned Parenthood or June Medical Services.

This is a developing story. Please check back for updates.