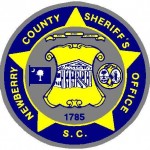 NEWBERRY COUNTY, S.C. (WOLO) – Multiple agencies have joined the search for suspects wanted in an attempted burglary near the Broad River.

According to a post on the Newberry County Sheriff’s Office Facebook page, deputies, SLED, and DNR are searching for a white male wearing blue jeans and a T shirt carrying a black back pack with bright orange trim. The other suspect is a black male wearing a dark Adidas jacket and a stocking cap.

The two separated after being chased by Deputies near the Pinner Bridges. The white male swam a section of the Broad River and went onto an island, officials say.

If anyone in the area sees any suspicious activity or people they should call 911 immediately.

Deputies, SLED, and DNR are searching for two people involved in an early morning attempted burglary and larceny on SC…