Rochester Police Chief, Deputy step down after days of unrest 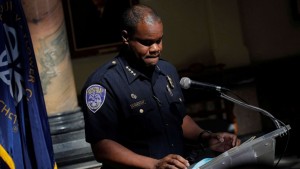 (ABC News) –After days of protests against the Rochester Police Department in light of the death of Daniel Prude, its top officer and his deputy announced Tuesday they are retiring from the force. Along with the police chief, six other department leaders announced they will vacate their roles.

Rochester Police Chief La’Ron Singletary said in a statement that he was honored to serve the city in upstate New York for 20 years and commended his staff. However, he said the protests and criticism of his handling of the investigation into the March 23 incident “are an attempt to destroy my character and integrity.”

“As a man of integrity, I will not sit idly by while outside entities attempt to destroy my character,” he said in a statement. “The members of the Rochester Police Department and the Greater Rochester Community know my reputation and know what I stand for.”

His retirement will be effective Sept. 29, according to Rochester City Council President Loretta Scott. Scott told ABC News as of now there is no blueprint for how the city moves forward following the retirements of the command staff.

Antonio Romanucci, the attorney representing Prude’s children, called Singletary’s departure “an important and necessary step to healing and meaningful reform in the community.”

“Clearly, the conduct of the officers in Mr. Prude’s case was inhumane, and the subsequent cover-up was unacceptable,” he said in a statement. “We look forward to securing justice for Mr. Prude and to having Rochester leaders do the hard work needed to address issues of systemic racism and training protocols in the police department.”

Mayor Lovely Warren informed the Rochester City Council that in addition to Singletary, the entire command staff announced it would be vacating their roles today. She noted that none of the police leaders were asked to resign.

The police union said the announcement took it by surprise, but laid blame at the foot of the mayor’s office.

“The events that have unfolded today have taken us completely by surprise, as they have everyone else,” the Rochester Police Locust Club said in a statement. “What is clear is that the problems of leadership go directly to the Mayor’s office. Our priority now is on the dedicated men and woman, who despite unprecedented challenges, continue to do a very difficult job.”

“Our members remain focused and committed to serving the citizens of this city, despite the lack of support and leadership that we are witnessing coming from our elected officials in City Hall,” the union added.

The announcement came during a scheduled city council meeting Tuesday afternoon, and Scott said she was totally unaware Singletary would make the announcement he did.

“It was unexpected. I didn’t know that it was going to happen,” Scott said. “I don’t know blindside is the right word. But yeah, right. This was a briefing to talk about how the police handled the protests.”