(ABC News) –Using some of his harshest language and maybe his most mocking tone yet, President Donald Trump attacked Democratic vice presidential nominee Kamala Harris on Tuesday night, saying Harris as the first female president would be an “insult to our country” while repeatedly mispronouncing her name.

“People don’t like her,” the president said at a rally in North Carolina, recounting her falling poll numbers on the Democratic primary trail. “Nobody likes her. She could never be the first woman president. She could never be. That would be an insult to our country.”

Calling her primary performance “like a free fall,” the president also claimed Harris is “further left than Crazy Bernie Sanders.”

“You know who’s further left than Crazy Bernie? Kamala. Kamala. Kamala,” Trump said, mispronouncing and stretching out each syllable of her name each time he said it.

The Biden campaign told ABC News it is not commenting on Trump’s comments right now.

Fatima Goss Graves, president and CEO of the National Women’s Law Center, on Wednesday called Trump’s latest attack on Harris a “racist and sexist dog-whistle designed to diminish her.”

“It reminds women of color in leadership roles of every time they have been similarly diminished,” she told ABC News.

An ABC News/Washington Post poll found last month that more Americans approve than disapprove of Harris on the ticket by a 25-point margin, 54-29%. Harris’ net favorability rating has polled higher than both presidential candidates.

Trump launched a similar attack on Harris and the prospect of her assuming the presidency two weeks ago at a New Hampshire rally, saying that while he hoped to see the first woman as president in his lifetime, it shouldn’t be Harris because the “she’s not competent.”

Harris, who served as California’s attorney general for seven years before being elected to the U.S. Senate in 2016, is the first woman of color to compete on a major party’s presidential ticket.

Trump made the remarks Tuesday to a crowd of more than 15,000 supporters, according to the campaign, at an airport hangar in Winston-Salem, North Carolina. The crowd was packed in and many supporters were unmasked, photos show. 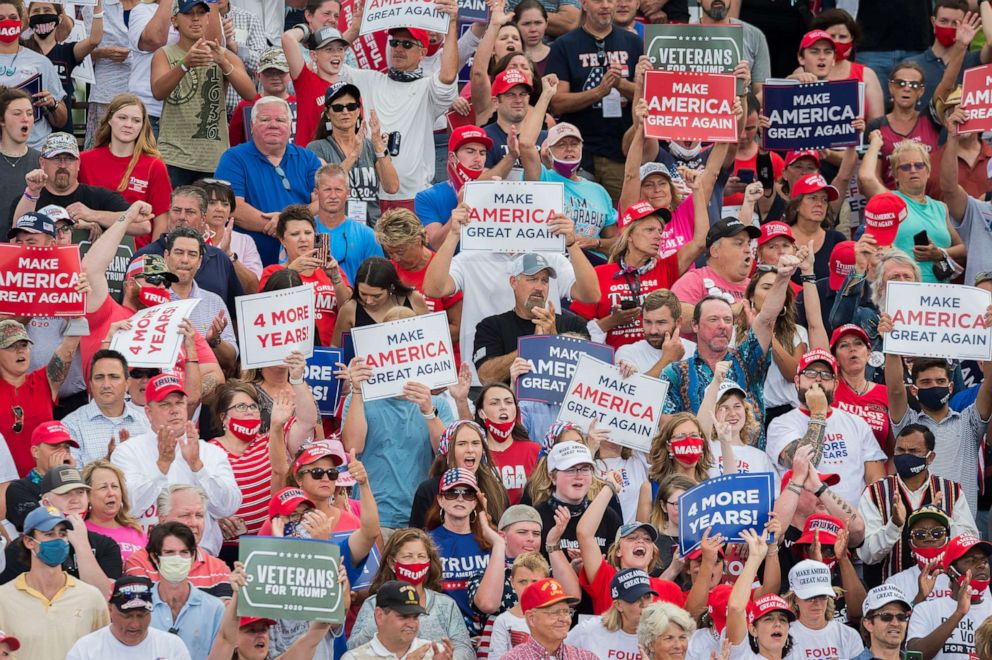 There, the president continued to rail against Democratic nominee Joe Biden who he said “has now formed an unholy alliance” with Harris.

But since Biden chose Harris as his vice presidential pick last month, the Trump campaign has struggled to find an effective line of attack against Harris.

After the Biden campaign announced the selection, the Republican National Committee sent out an email about the Harris pick with the headline “liberals revolt against Biden.” But at nearly the same exact time, an RNC national spokesperson tweeted claiming Harris was “completely controlled by radical left.”

Trump has previously called Harris “nasty,” “disrespectful,” “the meanest,” “the most horrible” and a “madwoman.”

Harris is a U.S. citizen, born in Oakland, California, but when Trump was asked about a Newsweek op-ed questioning her constitutional qualifications to be vice president, he told a reporter he would “take a look” at whether Harris was eligible to serve.

“I just heard it today that she doesn’t meet the requirements and by the way the lawyer that wrote that piece is a very highly qualified, very talented lawyer,” Trump said of the op-ed’s author. “I have no idea if that’s right.”

Bernadette Meyle, a law professor at Stanford Law School, told ABC News last month that the author’s argument had “no basis in constitutional law,” saying it’s been settled law since the Supreme Court decided the issue in 1898 — though it’s not the first time Trump entertained such theories.

“Trump in his 2016 campaign tried to make the argument that the Newsweek article is making, then later seemed to drop it. It has been a claim brought up several times by right-wing thinkers over the past decade or so. It has, however, no basis in constitutional law,” she said.

Trump amplified debunked conspiracy theories of former President Barack Obama’s eligibility to run for president, with many experts noting the birther questions are generally raised against people of color.

When asked about Trump potentially amplifying a false birther theory at the time, Harris said she expected the “dirty tactics.”

Harris, a former prosecutor, has attempted to make the case against the president on the campaign trail. She recently went after Trump’s credibility regarding his rosy timeline for a coronavirus vaccine ahead of the election when she said she would not trust Trump’s word alone on the safety of a vaccine.

“I will say that I would not trust Donald Trump, and it would have to be a credible source of information that talks about the efficacy and the reliability of whatever he’s talking about,” she told CNN Sunday.

She said that if the past is any indication she believes health experts and scientists “will be sidelined because he’s looking at an election coming up in less than 60 days, and he’s grasping for whatever he can get to pretend he has been a leader on this issue when he has not.”

Trump on Monday dismissed her comments as “reckless anti-vaccine rhetoric” before stepping up his attacks Tuesday.

The president is not the first conservative voice to mispronounce Harris’ name. A clip of Fox News host Tucker Carlson went viral last month after a guest corrected Carlson over his pronunciation of “Kamala.”

“So what?” Carlson said, before mispronouncing her name again.

Goss Graves told The Associated Press at the time the mispronunciations of “Kamala” is “an effort to diminish her” and “designed to signal difference.”

“When people are running for the highest levels of government, there’s an expectation they will be afforded with dignity and respect,” she said.

ABC News’ Ben Gittleson, Will Steakin and Averi Harper contributed to this report.