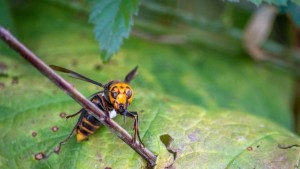 The “murder hornets” were first spotted in the state late last year, and entomologists have since been on alert for the massive insects, which can devastate honey bee populations.

After weeks of trapping and searching, Washington State Department of Agriculture entomologists located what they said is the first nest of its kind in the U.S., in Blaine, north of Seattle near the Canadian border.

The nest was found after four live hornets were caught this week in traps the agriculture department set up in the area. Entomologists were able to attach radio trackers to three of the hornets, and one of them led them to the nest — located in the cavity of a tree on private property Wednesday afternoon, officials said. The team observed dozens of hornets entering and leaving the tree.

Come on now, this is cute! An #AsianGiantHornet enjoyed some strawberry jam after being tagged yesterday. pic.twitter.com/1nQCL3oX1w

Entomologists said they expect to extract anywhere from 100 to 200 hornets from the tree based on findings from thermal cameras. The plan is to extract the insects using a vacuum, the agency’s managing entomologist, Sven Spichiger, said during a press briefing Friday afternoon.

“We will be jamming foam into the entrance and Saran-wrapping it so that we can control the release of hornets from the nest,” Spichiger said. “This will allow us to do the vacuum extraction in a little bit more controlled environment.”

The hornets typically nest in the ground, so the discovery of the nest about 8 feet up in the tree cavity was unexpected, Spichiger said. He did note that there is a possibility that this is not the real nest and that the hornets have “robbed a honeybee nest.” But “that is unlikely,” he added. Entomologists were looking to confirm it was the nest on Friday.

The first confirmed detection of an Asian giant hornet in the U.S. was in Whatcom County, Washington, in December, with two verified reports of the insect near Blaine. Two were also discovered in British Columbia, Canada, last fall.

Since then, 20 hornets have been caught in Whatcom County, according to the Washington State Department of Agriculture.

Spichiger said there is a “very good possibility” there is more than just this one nest in the area, given the evidence they have so far. The agency plans to keep the traps up through the end of November. “That should tell us a little more,” he added.

Hundreds of traps have been set throughout Washington by state agriculture department staff, scientists and others, in an attempt to eliminate the pest. The world’s largest hornet, at 2 inches, the apex predator can kill an entire honey bee hive in just hours. With bee populations already in decline in the U.S., in what’s known as “colony collapse disorder,” the hornets pose another threat to the ecosystem if they become established over several years.

“Unfortunately, managed honeybees we use here have no natural defense against them,” Spichiger said. “Stopping this cold is very crucial.”

“You should be cautiously optimistic that we’re still only talking about Whatcom County at this point,” he later said.

For humans, the hornet’s sting is more painful than that of a typical bee or wasp, and people are advised to use caution near the insects and not attempt to remove or eradicate nests themselves.

Native to Asian countries including China and Japan, it’s not known how the hornets arrived in the Pacific Northwest, though through international cargo is one theory.