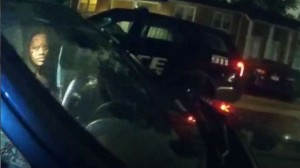 (ABC News) —A police officer involved in a fatal shooting in Waukegan, Illinois, did not turn his body-worn camera on until after the deadly confrontation with an unarmed Black couple, footage released by the police department showed.

Marcellis Stinnette, 19, was fatally shot and his girlfriend, Tafara Williams, 20, was seriously wounded during the Oct. 20 altercation in the suburban Chicago city after the officer opened fired into a car Williams was driving.

On Wednesday, the city released six videos related to the incident from body-worn cameras, dash cameras and building surveillance cameras. None capture the shooting itself.

In body camera footage taken before the shooting, an officer not involved in the shooting approaches the car and tells Stinnette he is under arrest. When Williams asks why, the officer says, “Because he got a warrant.” The officer has his hand on the car when Williams drives off. “Hey, they just ran me over,” the officer yells.

Once that officer, who has not been identified, turns on the body camera, he appears to be standing several yards away from the crashed car. About 30 seconds in, he says,

“I was right behind you, and you almost tried to run me over.” Another officer can be seen running toward the car and its passengers, yelling, “Are you OK? What happened? Who shot you?” as Williams can be heard screaming for help.

A few seconds later, the officer who ran toward the car backs away and asks several officers gathered at and arriving at the scene, “Who shot them?”

The officer who is wearing the body camera says, “I did,” and the other officer responds, “You did?”

In one of the dash camera videos, several shots can be heard fired, followed by the sound of a crash.

The lawyers for the families of the victims spoke to reporters after viewing the footage Wednesday.

“We don’t have the transparency, we don’t have the truth,” said lawyer Antonio M. Romanucci, who is representing the family along with prominent civil rights attorney Ben Crump adding, “We see over and over again, in other communities, in other neighborhoods, you show great restraint, you show de-escalation,” Crump said. “What is it about young Black people that makes police officers want to pull a trigger?”

On Tuesday, Williams spoke for the first time about the incident that killed the father of her 7-month-old child.

“There was a crash and I lost control. The officer was shooting at us. The car ended up slamming into a building,” she said from her hospital bed. “I kept screaming, ‘I don’t have a gun.’ But he kept shooting. He told me to get out of the car. I had my hands up and I couldn’t move because I had been shot. Marcellis had his hands up. I kept asking him why, why he was shooting.”

An independent investigation by the Illinois State Police and the FBI is ongoing. The unidentified officer involved in the shooting was fired late Friday, according to Waukegan Chief of Police Wayne Walles, after finding he allegedly violated numerous department policies and procedures when he unleashed a barrage of gunfire on the couple.

Walles has declined to elaborate on the violations allegedly made by the five-year veteran of the force, who authorities described as Hispanic.

Police officials initially said the former officer claimed he opened fire out of fear for his life after Williams’ car reversed toward him as he approached it.

Waukegan Police Department Cmdr. Edgar Navarro said earlier this week that Stinnette was sitting in the passenger seat of a “suspicious” car that was approached by an officer. The car fled and was later pulled over by a second officer.

“That officer exited his vehicle and the vehicle that he was investigating began to reverse toward the officer,” Navarro alleged. “The officer then pulled out his duty weapon and fired into the vehicle that was reversing. Both occupants were struck.”

Willams was struck in the hand and stomach.

The officer who initially approached the car has been placed on administrative duty during the investigation.

Your guide to navigating those awkward political dinner conversations this Thanksgiving

Jeopardy to be hosted by series of guests, beginning with Ken Jennings