ABC NEWS– Legendary host Alex Trebek has died at the age of 80. 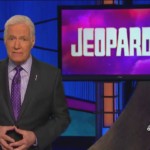 ‘Jeopardy! is saddened to share that Alex Trebek passed away peacefully at home early this morning, surrounded by family and friends. Thank you, Alex.’

The legendary host of Jeopardy will be remembered for his longtime work with the show. https://mobile.twitter.com/Jeopardy

Trebek had been battling pancreatic cancer.

Look back at the 93rd Academy Awards!