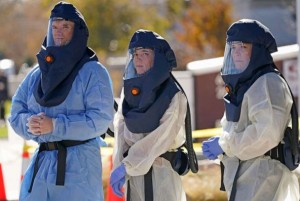 (ABC NEWS)— As COVID-19 case numbers and hospitalizations spike almost everywhere in the country, the doctors and public health experts advising President-elect Joe Biden are proposing a targeted strategy for imposing new restrictions — to avoid another backlash from the widespread lockdowns this spring and the negative impact on the economy.

They’re describing it as using a “dimmer switch” — dialing up and dialing down restrictions in hot spots as needed.

The number of identified cases and people hospitalized for COVID-19 has increased in nearly every state in the country this week and in 20 states the amount of people testing positive is higher than 10%. Several governors that previously resisted requirements on masks or limiting social gatherings have now implemented them in states like Iowa and Utah where the rapidly increasing number of cases is threatening to overtax hospitals.

The quickly spiking numbers prompted some experts to wonder if more widespread efforts were needed to combat the virus, including Michael Osterholm a member of Biden’s coronavirus task force.

But any attempt to keep businesses open, children in school, and fewer restrictions overall relies on Americans everywhere in the country wearing masks, keeping distance from people outside their household especially indoors, and getting the number of new cases under control.

Public health experts, including Dr. Anthony Fauci, director of the National Institute for Allergies and Infectious Diseases, have questioned whether Americans would support or comply with harsh lockdown directives after the “pandemic fatigue” and mental health strain of more than eight months of staying at home and seeing fewer friends and family.

A recent Gallup poll found that a reason for that concern. Gallup found the number of Americans who say they would comply with a shelter in place order has dropped 20% since the peak of cases in March and April, despite 61% of Americans acknowledging the pandemic is getting worse.

Former Surgeon General Vivek Murthy, a co-chair of Biden’s task force, said Friday that instead of a broad nationwide lockdown like the “30 days to slow the spread” approach pushed by the White House coronavirus task force in March, the Biden team wants to focus on a more targeted approach that could stop the spread of cases and limit the economic damage.

“I don’t think that this is a lockdown or not locking down — I think that’s how we thought about this and this in the spring, but I think we learned a lot since then about how this virus spreads and what we can do to reduce risk. And right now the way we should be thinking about this is more like a series of restrictions that we dial up or down depending on how bad the spread is taking place in a specific region,’ Murthy said in an interview on ABC’s “Good Morning America.”

Murthy compared the idea to New York City’s approach to implementing more restrictions in specific zip codes or parts of the city with uncontrolled community spread.

Celine Gounder, another member of the Biden task force and infectious disease specialist at NYU, said she supports targeted closures of places at higher risk of contributing to the spread of infection, like restaurants, bars, or gyms.

“As a group the consensus is we need a more nuanced approach, we’ve learned a lot since the spring, and we can be much more targeted geographically, we can also be much more targeted in terms of what we close. So I think of this as a dimmer switch not an on and off light switch,” she said in an interview on CNBC.

Michael Osterholm, one of Biden’s advisers and director of the Center for Infectious Disease Research and Policy at the University of Minnesota, suggested how a 4-6 week lockdown could subdue the pandemic in an interview with Yahoo Finance on Wednesday, a idea he had floated previously. But he later walked back the suggestion and said it isn’t the official position of Biden’s COVID-19 task force or something he’s discussed with the incoming administration.

Osterholm has also pointed out that “lockdown” has a different definition depending where you are. Fauci has often attributed inconsistent approaches to “locking down” around the country for the country’s failure to get case numbers low enough to prevent them from surging back up.

Former HHS Assistant Secretary for Preparedness and Response Nicole Lurie said Biden’s team can improve the pandemic response even before the transition officially begins by collaborating with governors and encouraging them to implement policies like limited restrictions and mask requirements.

“I think the real challenge is this thing is so out of control in so many places in the country the ability to save as many lives as we want to save is limited by the continued recalcitrance of the president and the administration to help the public and help governors,” she told ABC News.

Lurie said the Biden team’s approach could cut through some of the politics that have impeded the pandemic response in the weeks leading up to the election. The Gallup survey found the sharpest drop in Americans willing to comply with shelter-in-place measures was among Republicans.

“Controlling this pandemic isn’t about a political ideology, it’s not about Republicans and Democrats, it’s not about red states and blue states and the idea that social distancing or wearing a mask has been conflated with that is unfortunate,” she said.