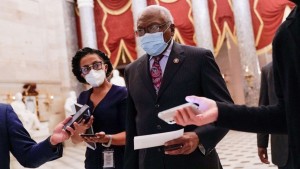 (ABC News) –Congressional investigators are looking into whether Dr. Robert Redfield, the director of the Centers for Disease Control and Prevention, allegedly requested that a subordinate delete an email sent by a Trump administration political appointee seeking changes to a coronavirus report written by career scientists.

Rep. Jim Clyburn, D-S.C., chair of the House committee investigating reports of political interference at the CDC, presented the allegation in a letter Thursday to Trump administration officials. In the letter, Clyburn described the committee’s interview with Dr. Charlotte Kent, who leads the CDC Scientific Publications Branch. Kent told those congressional investigators she was asked to delete the Aug. 8 email from former CDC political appointee Paul Alexander.

Clyburn tweeted a portion of his concerns Thursday.

I am deeply concerned that the Trump Administration’s political meddling with the nation’s coronavirus response has put American lives at greater risk, and that Administration officials may have taken steps to conceal and destroy evidence of this dangerous conduct.

The agency has not turned the alleged email over to the committee, and Kent, who was on vacation at the time, told investigators that when she returned it was gone.

But, according to Politico, which first reported on the email, Alexander accused the career scientists behind the “Morbidity and Mortality Weekly Report” –– used to update doctors and researchers on the pandemic — of “writing hit pieces on the administration” and overstating the risk of coronavirus to children.

“CDC to me appears to be writing hit pieces on the administration,” he wrote. “CDC tried to report as if once kids get together, there will be spread and this will impact school re-opening . . . Very misleading by CDC and shame on them. Their aim is clear.”

Kent, the editor-in-chief of the report, said she was told the request to delete the email, relayed through a colleague, originated from Redfield.

“Regarding the email in question, I instructed CDC staff to ignore Dr. Alexander’s comments,” Redfield said in a statement. “As I testified before Congress, I am fully committed to maintaining the independence of the MMWR, and I stand by that statement.”

Rep. Steve Scalise, R-La., the top Republican on the committee, also put out a statement slamming the letter.

“The letter fails to acknowledge the predicate of the Democrats’ investigation is now fully debunked. Despite there being zero evidence of actual interference in CDC scientific reports, Select Subcommittee Democrats continue to search for illusory evidence in obstruction of the Trump Administration’s unprecedented whole-of-America response to the coronavirus pandemic. Dr. Kent, a career CDC official, unequivocally confirmed that there was no political interference and the scientific integrity of the MMWR was never compromised. Case closed.”

Alexander, a Canadian researcher, was hired as a policy adviser to Michael Caputo, a Trump loyalist installed by the president at HHS. Alexander left the agency with Caputo, who went on medical leave in September after accusing government scientists of “sedition” and calling on Trump supporters to arm themselves before the election in a Facebook Live video. He later apologized for the comments.

Kent also told the panel that at Redfield’s request, the CDC delayed the release of a report on a coronavirus outbreak at a Georgia summer camp until after he was scheduled to testify before the committee on the reopening of schools during the pandemic.

“With coronavirus cases, hospitalizations, and deaths in the United States reaching new records, it is critical that the American people can trust the federal government to provide accurate public health information based on the best science — not based on politics,” Clyburn wrote in his letter to Redfield and Azar.

In the letter, Clyburn also requested documents that have been withheld from the committee and threatened to subpoena the CDC over the production. He also requested a transcribed interview with Redfield and other CDC officials, whom he said HHS blocked from appearing before the panel after Kent’s session.

“The Subcommittee’s characterization of the conversation with Dr. Kent is irresponsible,” an HHS spokesperson said in a statement to ABC News.

“We urge the Subcommittee to release the transcript in full which will show that during her testimony Dr. Kent repeatedly said there was no political interference in the MMWR process. Moreover, during the interview referenced in the letter, a staff member on the Subcommittee chose to violate basic common practices of attorney-client privilege that protect the interests of the Department but more importantly the witness. Despite HHS working diligently to accommodate the Select Subcommittee’s many requests, the Subcommittee is not operating in good faith.”