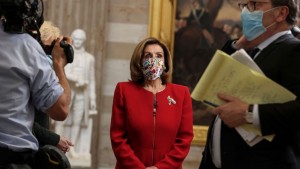 (ABC News) –In an extraordinary move, House Speaker Nancy Pelosi said Friday she had reached out to the Chairman of the Joint Chiefs of Staff Mark Milley to discuss “available precautions” for preventing what she called “an unstable president” from accessing the nuclear launch codes or initiating military hostilities before he is out of office in 12 days.

She revealed the startling development in a letter to Democratic colleagues Friday morning, a day after she called on Vice President Mike Pence to immediately remove Trump from office by invoking the 25th Amendment and threatening a second impeachment of Trump if Pence failed to act.

“This morning, I spoke to the Chairman of the Joint Chiefs of Staff Mark Milley to discuss available precautions for preventing an unstable president from initiating military hostilities or accessing the launch codes and ordering a nuclear strike,” she said in the letter. “The situation of this unhinged President could not be more dangerous, and we must do everything that we can to protect the American people from his unbalanced assault on our country and our democracy.”

In a terse statement, Col. Dave Butler, a spokesperson for Chairman of the Joint Chiefs of Staff, confirmed the call.

“Speaker Pelosi initiated a call with the Chairman. He answered her questions regarding the process of nuclear command authority.”

The White House did not immediately respond to a request for comment.