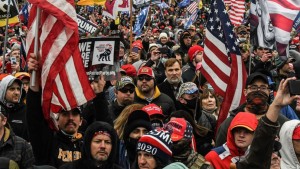 (ABC News) — Starting this week and running through at least Inauguration Day, armed protests are being planned at all 50 state capitols and at the U.S. Capitol, according to an internal FBI bulletin obtained by ABC News.

The FBI has also received information in recent days on a group calling for “storming” state, local and federal government courthouses and administrative buildings in the event President Donald Trump is removed from office prior to Inauguration Day. The group is also planning to “storm” government offices in every state the day President-elect Joe Biden will be inaugurated, regardless of whether the states certified electoral votes for Biden or Trump.

“The FBI received information about an identified armed group intending to travel to Washington, DC on 16 January,” the bulletin read. “They have warned that if Congress attempts to remove POTUS via the 25th Amendment, a huge uprising will occur.”

Following the violent pro-Trump breach of the U.S. Capitol last Wednesday, Democratic lawmakers in the House of Representatives pushed forward Monday with an effort to get Vice President Mike Pence and the Cabinet to invoke the 25th Amendment, which would declare Trump incapable of performing his presidential duties and would install Pence as acting president until Biden is inaugurated Jan. 20.

The effort was ultimately blocked by Republican Rep. Alex Mooney of West Virginia, and House Democrats then introduced an article of impeachment against Trump for “incitement of insurrection.”

The measure, which has more than 200 Democratic co-sponsors, states Trump has “demonstrated that he will remain a threat to national security, democracy and the Constitution if allowed to remain in office and has acted in a manner grossly incompatible with self-governance and the rule of law.”

According to the FBI, approximately 29 individuals and/or social media accounts of individuals who unlawfully entered the Capitol had been identified as of Sunday. To date, the FBI has received nearly 45,000 digital media tips that are now being reviewed. On Twitter the most recent post asks anyone aware of planned potentially harmful events to be reported.

FBI Twitter accounts are for informational purposes only. Submit all tips on terrorism and federal crime through official channels: Report online at https://t.co/t8G7LO4hxu or contact your local FBI field office or U.S. Embassy or Consulate. pic.twitter.com/2zXHkEcA0G

At least five people died during the siege on the Capitol, including Capitol Police officer Brian Sicknick. The FBI bulletin said Sicknick “died from injuries sustained during the U.S. Capitol breach.”

The FBI is still searching for several individuals connected to the attack at the United States Capitol building last week. January 6th, 2021.

#FBIWFO is seeking public’s assistance in identifying those who made unlawful entry into US Capitol & assaulted federal law enforcement on Jan 6. If you have info, report it to the #FBI at 1-800-CALL-FBI or submit photos/videos at https://t.co/NNj84wkNJP. https://t.co/OCiVFecXW8 pic.twitter.com/Zq0lnOzNTY

The Columbia Police Department confirmed to ABC Columbia News that they too have been contacted by the FBI and asked to remain on alert.