Dr. Fauci : ‘ It’s Liberating’ to discuss facts of coronavirus without fear of ‘repercussions’ 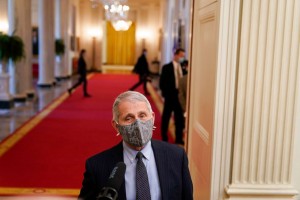 (ABC News) –In a Thursday press conference addressing the Biden administration’s response to COVID-19, the president’s chief medical adviser Dr. Anthony Fauci said there were aspects of former President Donald Trump’s response to the pandemic that were “not based on scientific fact.”

“I don’t want to be going back, you know, over history, but it is very clear that there were things that were said, be it regarding things like hydroxychloroquine and other things like that that was uncomfortable because they were not based on scientific fact,” Fauci told reporters.

“I can tell you, I take no pleasure at all in being in a situation of contradicting the president. So it was really something that you didn’t feel that you could actually say something and there wouldn’t be any repercussions about it. The idea that you can get up here and talk about what you know, what the evidence — what the science is, and know that’s it, let the science speak, it is somewhat of a liberating feeling,” he added.

Fauci is one of the few holdovers in the Biden administration from former President Donald Trump’s Coronavirus Task Force. When asked how the new government would be different from the last, Fauci pledged that it would be transparent.

Dr. Fauci on former Pres. Trump: “You didn’t feel that you could actually say something and there wouldn’t be any repercussions”

“The idea that you can get up here and talk about what you know…let the science speak—it is somewhat of a liberating feeling” https://t.co/9u4MaW1qas pic.twitter.com/aBBDGqxTqV

“If things go wrong, not point fingers, but to correct them, and to make everything we do be based on science and evidence. I mean, that was literally a conversation I had with the 15 minutes ago with the president. And he has said that multiple times.”