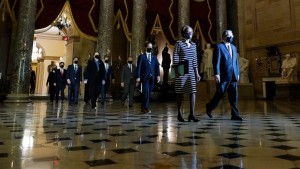 (ABC News) –House impeachment managers were delivering an article of impeachment against former President Donald Trump to the Senate Monday, queuing up a record-setting second trial for him in the chamber.

The managers, led by Rep. Jaime Raskin, D-Md., and appointed by House Speaker Nancy Pelosi, silently walked the article across the Capitol — from the House to the Senate — where senators awaited their arrival.

The House voted to impeach the former president on Jan. 13, a week after pro-Trump rioters stormed the Capitol in an attempt to disrupt the certification of the 2020 electoral college votes.

Despite the presentation of the article to the Senate today, the official trial is not expected to begin until the week of Feb. 8.