Biden Senior Advisor says" There's no debate here about whether to go back to shcool, there's a debate no how' 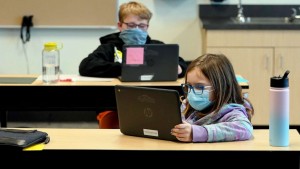 (ABC News) –Public health guidance for reopening schools will be released Friday by the Centers for Disease Control and Prevention, a top adviser in the Biden administration said Thursday.

Andy Slavitt, a senior adviser for the COVID-19 response, said on MSNBC Thursday that the CDC will “roll out their operating plan to give school districts, local communities the guidance they need to begin to do that and do that aggressively.”

“There’s no debate over whether to open schools here, there’s a debate on how,” he said.

In question is how far the Biden administration will go. Almost a year into the pandemic, there still has not been a clear federal standard on when it is safe to open a school. There has only been guidance for operating schools during COVID-19, including considerations for mitigation strategies like hand hygiene and wearing masks.

The upcoming recommendations from the CDC come as the Biden administration’s plan to reopen schools is under some scrutiny.

It initially appeared to be a bold plan: a goal to reopen the majority of schools in 100 days. But the novelty was swiftly called into question this week when White House Press Secretary Jen Psaki clarified what the administration meant by “open.”

Psaki said that goal meant ensuring over 50% of K-8 schools offered in-person learning at least one day a week.

“Students deserve more than this meager approach to returning safely to their classrooms,” she added.

Rep. Vicky Hartzler, R-Mo., tweeted: “Having only 51% of our schools reopen for as little as one day a week is not a ‘success.’ We should be working to safely get all of our children back to full-time, in-person learning.”

The Trump administration had demanded that schools reopen but without clear guidance to schools and teachers on when it would be safe to do so. The Trump administration’s Education Department also never collected data from schools on closures or best practices — information that could have been useful in informing local officials struggling to make decisions on when to open or close classrooms.

Psaki defended the administration’s position on Wednesday, telling reporters: “The President’s objectives is for all schools to reopen, to stay open, to be open five days a week, for kids to be learning. That’s what our focus is on. This is simply a goal for 100 days.”

“That’s, again, the bar of where we’d like the majority of schools across the country to be, which they’re not at this point in time, and we want to build from there,” she said.

But according to at least one data service, the majority of schools are already open.

Burbio, which, according to its website, “audits a comprehensive set K-12 learning plans across districts representing 3,000 US counties in the US, reported on Monday that approximately 64% of K-12 students are attending a school with some form of in-person learning available, including hybrid and traditional learning environments.

On Thursday, Psaki said part of the challenge is “that the data is not great as it relates to schools that are open or not open, how hybrid learning is impacting kids.”

“We look forward to hearing their clear, science-based guidelines for opening schools safely and keeping them open,” Psaki said. “These guidelines are going to be the basis for how our health and medical experts, the incredible leadership at the CDC, our future Secretary of Education [Miguel] Cardona will work with school districts around the country to safely reopen. And that’s where our focus will be. But the data and the lack of data or effective data is actually part of the problem” she said.