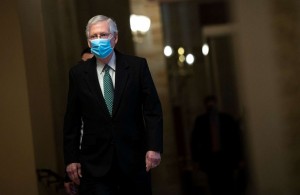 (ABC News) —Senate Minority Leader Mitch McConnell is hitting back at critics who accuse him of hypocrisy for voting not guilty in former President Donald Trump‘s trial and then blaming him for provoking the Capitol attack — as well as for his claim it was too late to convict when critics say he could have called the Senate back earlier.

In an op-ed in the Wall Street Journal, McConnell repeated what he said on the Senate floor after Saturday’s vote that there is “no question former President Trump bears moral responsibility.”

“But after intense study, I concluded that Article II, Section 4 limits impeachment and conviction to current officers,” he wrote.

Trump blasted the senator in a lengthy press release Tuesday afternoon, calling McConnell a “dour, sullen, and unsmiling political hack, and if Republican Senators are going to stay with him, they will not win again.”

“The Republican Party can never again be respected or strong with political ‘leaders’ like Sen. Mitch McConnell at its helm,” the former president said in the rare statement issued since he left office. “McConnell’s dedication to business as usual, status quo policies, together with his lack of political insight, wisdom, skill, and personality, has rapidly driven him from Majority Leader to Minority Leader, and it will only get worse.”

Trump also took credit for McConnell’s reelection — saying he now regrets the endorsement — and blamed him for losing control of the Senate with two Democratic victories in Georgia.

House Speaker Nancy Pelosi argued on Saturday that McConnell delayed a trial while Trump was still in office by not bringing the Senate back until Jan. 19, a day before Trump was to leave the White House.

“It is so pathetic that Senator McConnell kept the Senate shut down so that the Senate could not receive the article of impeachment and has used that as his excuse for not voting to convict Donald Trump,” Pelosi said.

“Here’s what the scheduling critics are really saying: Senate Republicans should have followed a rushed House process with a light-speed Senate sham,” McConnell responded. “They think we should have shredded due process and ignited a constitutional crisis in a footrace to outrun our loss of jurisdiction.”

“Consider the claim that I could have steered around the jurisdictional issue by recalling the Senate between Jan. 14 and Jan. 20, while Mr. Trump was still in office,” he wrote. “The salient date is not the trial’s start but the end, when the penalty of removal from office must be possible. No remotely fair or regular Senate process could have started and finished in less than one week. Even the brisk impeachment process we just concluded took 19 days.”

With regard to his argument that once Trump was gone, the Senate no longer had jurisdiction, he wrote, “One House manager who lauded the Constitution when the trial began now derides it as “a technicality.” Another called this pivotal question “a loophole. … Liberals said they condemned the former president’s rules-be-damned recklessness. But many apparently cannot resist that same temptation.”

“President Biden, who knows the Senate, stated as early as Jan. 8 that his swearing-in was the ‘quickest’ possible path to changing the occupant of the White House. Especially since the House didn’t vote until Jan. 13, any legitimate Senate process was certain to end after Inauguration Day,” McConnell continued, a point he argued last month, too.

The Senate voted last Tuesday, 55-45, to affirm its power that Trump trial’s was constitutional and within their authority to proceed. McConnell voted against its constitutionality then.

In floor remarks Saturday after his acquittal vote, McConnell excoriated his former ally and said there was “no question” Trump was “practically and morally responsible for provoking the events of the day.”

“If President Trump were still in office, I would have carefully considered whether the House managers proved their specific charge” — but given that option, since Trump was impeached by the House on Wednesday, Jan. 13, he did not use it — even as Democrats, including Senate Minority Leader Chuck Schumer, publicly urged him to call the Senate back early for an emergency session to begin the trial.

Sen. McConnell: “There’s no question—none—that Pres. Trump is practically and morally responsible for provoking the events” of January 6.

“The people who stormed this building believed they were acting on the wishes and instructions of their president.” https://t.co/InnhdCZLiD pic.twitter.com/FOM9Yoz81S

“It was obvious that only President Trump could end this,” McConnell said Saturday. “The president did not act swiftly. He did not do his job.”

Because McConnell directly agreed with their case but remained adamant the Senate lacked jurisdiction to try a former president, House impeachment managers decided not to call witnesses even after getting enough votes to do so, illustrating the significance of his vote.

“We could have had 5,000 witnesses and Mitch McConnell would have made the same speech because what he’s asserting is that the Senate never has jurisdiction over a former president,” lead House impeachment managers Rep. Jamie Raskin, D-Md., said. “And for reasons I don’t need to belabor — because a big part of the trial was about this — we reject that completely. It’s totally at odds with our history.”

McConnell has left the door open, in his view, for Trump to be criminally prosecuted.

“President Trump is still liable for everything he did while he’s in office,” he said on Saturday. “He didn’t get away with anything yet.”

However, he did not make mention of that route in his op-ed. Perhaps in an attempt to build unity in his party which is facing massive fissures, McConnell wrote he respects the decision of the seven Republicans who voted to convict, supported by their interpretation of the Constitution.

“I respect senators who reached the opposite answer,” he wrote. “What deserve no respect are claims that constitutional concerns are trivialities that courageous senators would have ignored.”