Dr. Fauci: Elementary students will not get vaccinated until 2022, after High Schoolers 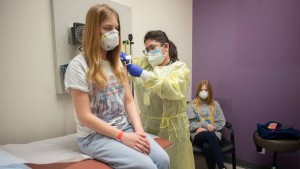 (ABC News) –The White House announced a pushed-back timeline for children to receive COVID-19 vaccines, telling reporters at a Friday briefing that high school students may receive vaccines in the fall, but elementary school children won’t receive them until early 2022.

Previously, Dr. Anthony Fauci, White House chief medical adviser, predicted high school students would begin to get vaccinated in the spring or summer, while students as young as first grade would begin getting vaccinated by the time school returns in September. The newest timeline pushes each stage back by around four to five months. The White House did not provide an explanation for the shift.

“The bottom line of all of this is as follows: It is highly likely that sometime in the fall, we will have data that will give us the capability of saying the safety and comparable efficacy in children 12 to 17, 18 years old,” Fauci said, adding that studies of younger children “almost certainly will not be firmed down until the first quarter of 2022.”

Fauci cautioned that this would be the earliest possible timeline because he was only predicting when the trials would be complete, which doesn’t include the time it takes for the Food and Drug Administration to make its final decision to approve the data, if they do so.

“Again, the final decisions we always leave to the FDA,” Fauci said. “I’m trying to give you a roadmap of what likely will happen.”

Fauci was specifically talking about vaccinating children with Pfizer and Moderna vaccines, which are currently the only two vaccines approved for emergency use in the U.S., but said other vaccine candidates are taking the same approach. The FDA has so far authorized Pfizer’s vaccine for people 16 or older and Moderna’s for those 18 or older.

Fauci said Pfizer will start studying the vaccine in 5- to 12-year-olds beginning in April. He said that study will take a year, but anticipates data on 12- to 15-year-olds sometime in the fall.

“Maybe not exactly coinciding with the first day of school, but sometime in the fall, we will have that,” Fauci said.

Fauci said the timeline was similar for Moderna: sometime in the fall for high school students and not until at least early 2022 for elementary school students.

The trials for school-age children are smaller than the initial trials to approve the vaccines, which had from 30,000 to 40,000 participants. Instead, they have only a few thousand participants. The trial will study if the vaccine is safe in children and if it induces a comparable immune response in the vaccines approved for adults.

The new information on when study data will be available conflicts with what Pfizer and Moderna said just a week ago.

Fauci told ProPublica on Feb. 11 that children as young as first grade may be able to get the vaccine by the time school starts in September, presuming the trials were successful.

“We’re in the process of starting clinical trials in what we call age deescalation, where you do a clinical trial with people 16 to 12, then 12 to 9, then 9 to 6,” Fauci said in the interview with ProPublica.

When asked what was the youngest age group that might be authorized for the vaccine by September, he said, “I would think by the time we get to school opening, we likely will be able to get people who come into the first grade.”

It marks the third shift for Fauci this week, who has begun telling the public to expect “normalcy” in early 2022 and vaccines to open up to anybody who wants one in May or June. Previously, Fauci said things would return to normal in mid-fall and “open season” for vaccines would be in April. Fauci and others at the White House have said part of the reason for the shifting timelines is a smaller-than-expected incoming inventory of Johnson & Johnson vaccines, expected to be approved in the coming weeks, which will not speed the process up as much as they initially predicted.

Doctors have increasingly described the urgency of authorizing a COVID-19 vaccine for children, fearing that the longer it takes to vaccinate the millions of children in the country, the harder it will be to stop the spread and the more likely variants will develop.

As of Feb. 11, over 3 million children have tested positive for COVID-19 since the onset of the pandemic, according to data collected by the American Academy of Pediatrics and the Children’s Hospital Association, representing about 13% of all reported cases.

Still, less than 2.3% of all coronavirus cases in children have resulted in hospitalization and less than 0.05% cases resulted in death, according to the same data, and doctors maintain that the disease is much less severe for children.