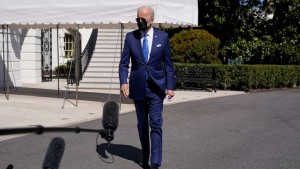 He spoke shortly after issuing a statement on what he called the “attack on the right to vote in Georgia,” a state he won in November amid debunked claims of fraud.

“[I]nstead of celebrating the rights of all Georgians to vote or winning campaigns on the merits of their ideas, Republicans in the state instead rushed through an un-American law to deny people the right to vote. This law, like so many others being pursued by Republicans in statehouses across the country is a blatant attack on the Constitution and good conscience,” Biden said in the statement.

He later said the Justice Department was looking into the matter.

On Thursday afternoon, Georgia Republicans voted to pass and sign into law a 90-page bill that severely limits voting rights in a previously Republican-dominated state that, besides Biden, also elected two Democratic senators in the 2020 election. Republicans said they were ensuring election integrity.

When the bill was sent quickly to GOP Gov. Brian Kemp for his signature, a Democratic state representative from Atlanta, Park Cannon, went to his office, knocked on the governor’s closed office door, demanding to be let in.

In a scene caught on video, she was arrested by Georgia state troopers, taken from the building, and charged with a felony for obstruction of law enforcement and preventing or disrupting General Assembly sessions, according to the Georgia State Patrol. 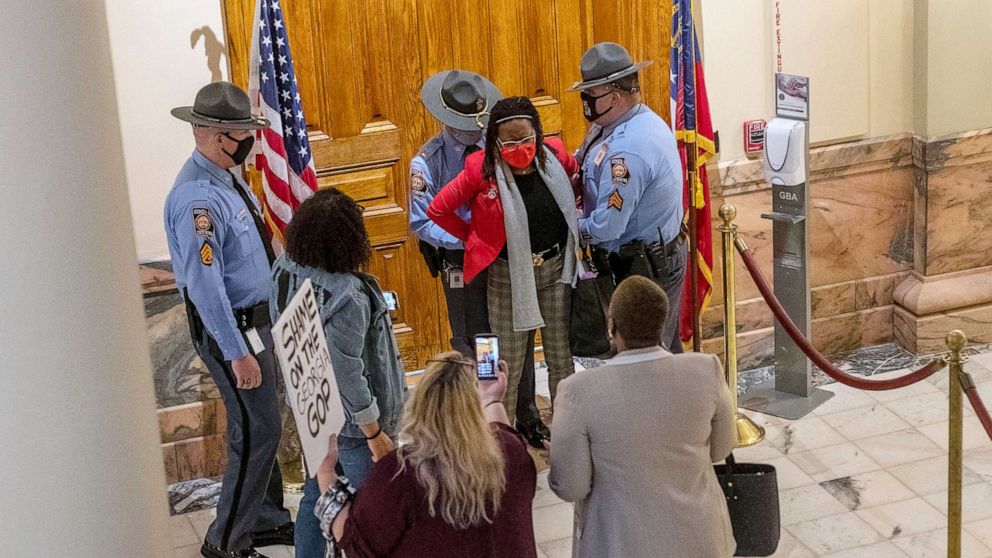 “I think anyone who saw that video would have been deeply concerned by the actions that were taken by law enforcement to arrest her when she simply, by the video that was provided, seemed to be knocking on the door to see if she could watch a bill being signed into law,” White House press secretary Jen Psaki said at her Friday briefing.

Biden, in his statement, said he would “take his case to the American people.”

“This is Jim Crow in the 21st Century. It must end. We have a moral and Constitutional obligation to act. I once again urge Congress to pass the For the People Act and the John Lewis Voting Rights Advancement Act to make it easier for all eligible Americans access the ballot box and prevent attacks on the sacred right to vote,” he said in the statement.

Earlier Friday, White House communications director Kate Bedingfield told CNN Biden will work to ensure the Senate passes the voting rights bill that could negate Georgia’s new law, without being specific whether he would support doing away with the Senate filibuster rule in order to get it done.

“You saw him speak to this yesterday, incredibly forcefully, you know, he said what we see going on here is sick, it’s un-American,” she said. “So, yes, and he is going to work to push forward and ensure that we are signing this legislation into law.”

However, with a very narrow Democratic majority in the Senate, passing the legislation might mean doing away with the filibuster, something Biden has maintained he doesn’t want to do, but hinted Thursday that is might be an option to achieving policy goals.

“In terms of the filibuster, his great hope, his preference is we can work together on issues that matter tremendously to the American people,” Bedingfield said. “If Republicans refuse to do that, then as he said yesterday, he’ll look at different options, but his hope is we can continue to work together.”

“What I’m worried about is how un-American this whole initiative is. It’s sick. It’s sick. Deciding in some states that you cannot bring water to people standing in line waiting to vote? Deciding that you’re going to end voting at 5:00 when working people are just getting off work? Deciding that there will be no absentee ballots under the most rigid circumstances?” Biden said at his Thursday news conference. “It’s all designed.”

He kept up his criticism in Friday’s statement.

“Among the outrageous parts of this new state law, it ends voting hours early so working people can’t cast their vote after their shift is over. It adds rigid restrictions on casting absentee ballots that will effectively deny the right to vote to countless voters. And it makes it a crime to provide water to voters while they wait in line – lines Republican officials themselves have created by reducing the number of polling sites across the state, disproportionately in Black neighborhoods,” he said.

Asked Friday how the voting rights issue affected his thinking on the Senate filibuster, Biden seemed to tamp down expectations.

“You know, you have to have 50 votes. 51 votes. You have to win to be able to move the filibuster, on any change in the filibuster. And right now, that doesn’t exist,” he told reporters. “That doesn’t exist. So, you know, look, I — The only thing I’ve been relatively good at in my long career in the Senate is figuring out when to move and when not to move. You got to have the votes.”

“There is nothing ‘Jim Crow’ about requiring a photo or state-issued ID to vote by absentee ballot – every Georgia voter must already do so when voting in-person. President Biden, the left, and the national media are determined to destroy the sanctity and security of the ballot box,” Kemp said in a statement.

Prosecutors: No charges for officer in Capitol riot shooting

Biden to pull troops from Afghanistan, end longest US war

Protests continue in Minnesota over the death of Daunte Wright