Some rank-and-file Republicans defied their party leaders by voting in favor. 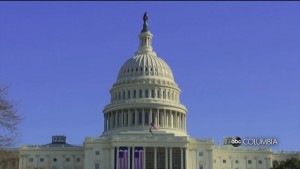 (ABC News) —The House on Wednesday approved a measure creating an independent commission to investigate the Jan. 6 Capitol attack, with some rank-and-file Republicans even voting with Democrats in defiance of their party leaders who warned against the effort.

The bill passed 252-175, with 35 Republicans voting with Democrats. There was applause in the chamber as House Speaker Nancy Pelosi announced the totals and closed the vote. the measure now heads to the Senate, where its fate is uncertain.

Ahead of the vote, House Democratic leaders argued that they had made several concessions to Republicans to reach a compromise, with Pelosi saying GOP leaders have raised last-minute objections because they’re “afraid of the truth.”

Asked if House Minority Leader Kevin McCarthy and other Republicans are afraid of being subpoenaed to testify before a commission, Pelosi responded, “You have to ask them what they’re afraid of. But it sounds like they are afraid of the truth, and that’s most unfortunate. But hopefully they’ll get used to the idea that the American people want us to find the truth.”

“I certainly could call for hearings in the House with a majority of members being Democrats, and full subpoena power, and the agenda being determined by Democrats — but that’s not the path we have chosen to go,” Pelosi asserted. “We wanted the American people to have the fullest confidence in the product that there is.”

House Homeland Security Committee Chairman Bennie Thompson, D-Miss., who negotiated the agreement with Rep. John Katko, R-N.Y., said it was a “shock” when McCarthy, R-Calif., told reporters he hadn’t seen the agreement when it was announced.

“We have letters from him responding to it, so it’s not like he hadn’t seen it,” Thompson said of negotiations. “There were no issues” on McCarthy’s part when he was constantly updated by Katko and staff, Thompson continued, “But I guess that’s politics.”

“The American people expect us to put partisanship aside for the sake our homeland security,” he added, calling the deal “reasonable,” “nonpartisan” and “nearly identical” to the bill he and 31 other House Republicans introduced to establish a commission in the days after the Jan. 6 attack.

“If we avoid confronting what happened here a few short months ago we can ensure that intimidation, coercion and violence will become a defining feature of our politics,” Meijer said.

“We need the answers, not political rhetoric, which is what this bipartisan commission can provide for all of us, for our country,” Upton said. “Let the truth shine in.”

Senate Minority Leader Mitch McConnell, R-Ky., on Wednesday morning came out against the measure to create a panel of five Republican and five Democratic appointees, one day after telling reporters he was undecided on the plan.

“After careful consideration I’ve made the decision to oppose the House Democrats’ slanted and unbalanced proposal,” he said on the floor.

On Tuesday, McCarthy called the proposal “potentially counterproductive” and “duplicative,” while the office of GOP Whip Steve Scalise, R-La., who also criticized the measure, advised Republicans to oppose it.

Senate Majority Leader Chuck Schumer, D-N.Y., has pledged to bring the measure to a vote, but it’s unclear if 10 Republicans will support the bill and allow it to advance through the chamber.

In a statement Tuesday evening, former President Donald Trump called the plan a “Democrat trap,” even though earlier this month, Pelosi deputized Thompson to finalize negotiations on the commission with Katko, the GOP’s ranking member, on a bipartisan basis.

“Republicans must get much tougher and much smarter, and stop being used by the Radical Left,” Trump said.

McCarthy and other Republicans who expressed wariness about the plan worried that the panel’s inquiry into the Jan. 6 Capitol riot would interfere with ongoing law enforcement efforts to pursue rioters who entered the Capitol and clashed with police officers, as well as the several bipartisan committee investigations in the House and Senate.

They also called for an expanded scope to review “political violence” in general — a reference to episodes of looting reported during the wave of racial justice demonstrations across the country last summer — and criticized the language in the proposal regarding hiring of commission staff, which mirrors the language used to establish the 9/11 Commission.

“When will the witch hunt of Donald Trump and those who support him come to an end?” Rep. Marjorie Taylor Greene, R-Ga., said on the House floor Tuesday in opposition to the commission. “We should have a commission to study the violent antifa and (Black Lives Matter) mobs.”

The proposal, like the 9/11 Commission, would require agreement between the leading Democratic and Republican members to issue any subpoenas.

“As we did in the wake of Sept. 11, it’s time to set aside partisan politics and come together as Americans in common pursuit of truth and justice,” former New Jersey GOP Gov. Tom Kean, and former Democratic Rep. Lee Hamilton of Indiana, who served as the chairman and vice chairman of the 9/11 Commission, said in a statement Wednesday.

While many House Republicans appeared undecided on the vote Tuesday night, several dozen could side with Democrats to pass the bill, including members of the bipartisan Problem Solvers Caucus, which endorsed the measure Tuesday night.

“I’m happy to put a light on all the facts and timelines,” said Rep. Don Bacon, R-Neb., who planned to vote for the measure.

Rep. Liz Cheney, R-Wyo., and other Republicans who supported Trump’s second impeachment after the Jan. 6 riot signaled support for the measure as well.

Cheney, who was expelled from House GOP leadership after her repeated condemnations of Trump and his baseless comments about the 2020 election, suggested in an interview with ABC News Chief Washington Correspondent Jonathan Karl on Friday that McCarthy ought to testify before the commission given his conversations with Trump during the riot.

McCarthy reportedly told Trump to call off his supporters during the riot at the Capitol, according to a statement from Rep. Jaime Herrera Beutler, R-Wash., who cited a conversation with McCarthy.

Herrera Beutler said Trump replied, “‘Well, Kevin, I guess these people are more upset about the election than you are.'” McCarthy did not deny Trump’s comments but downplayed them in a subsequent interview about their exchange.

“I would hope he doesn’t require a subpoena, but I wouldn’t be surprised if he were subpoenaed,” Cheney said of McCarthy.

McCarthy told a few reporters off the House floor Wednesday that he has “no concern” about being subpoenaed to appear before any committee to discuss his conversations with Trump.

The vote on the commission comes as some Republicans have tried to minimize the violence on Jan. 6 and downplay the riot, which left several people dead, including a Capitol Police officer who died of natural causes after clashing with protesters, and one rioter who was fatally shot when trying to enter the House chamber.

Some Democrats want to censure the Republicans for their comments about the riot, including Rep. Andrew Clyde, R-Ga., who compared it to a tourist visit, and Rep. Paul Gosar, R-Ariz.On Wednesday, Capitol Police said in a statement that the department does “not take positions on legislation,” after a Democratic House office distributed what they said was an anonymous letter from Capitol Police officers criticizing comments made by GOP leaders about the Jan. 6 commission proposal.

Rep. Jamie Raskin’s office said the letter was given to them by officers who feared retribution, on behalf of 40 to 50 members of the Capitol Police force — a claim ABC News could not immediately verify. Julie Tagen, Raskin’s chief of staff, distributed the letter to an email list of Republican and Democratic chiefs of staff Wednesday afternoon.