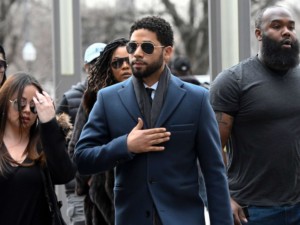 (ABC NEWS) —- After just 10 hours of deliberation, a Chicago jury has found actor Jussie Smollett guilty on five of six counts for filing a false police report related to the hoax racist attack he suffered at the hands of two men in January 2019.

The “Empire” actor alleged he was attacked, doused with an unknown liquid, had a noose placed around his neck and called racist and homophobic slurs by two men late at night on a Chicago street. He has maintained it was not orchestrated by himself.

He did not show any reaction as the verdicts were read. He could face up to three years in prison, though he will likely not face nearly so stiff a sentence.

“During my closing argument I told the jury that I thought the evidence was overwhelming. … That verdict was a resounding message by the jury that Mr. Smollett did exactly what we said he did,” special prosecutor Dan Webb told reporters after the verdict.

Webb called the guilty verdict a “complete vindication” for the Chicago Police Department, with several officers testifying during the trial.

Smollett was charged with six counts of felony disorderly conduct for allegedly filing a false police report. He was found guilty of all five counts related to what he told police officers immediately following the attack. The sixth count, of which he was found not guilty, related to further comments he gave to police two weeks after the incident.

Smollett’s lawyers said they will appeal the verdict. He said Smollett was “disappointed” but remains “100% confident” he will win on appeal.

“We remain confident on appeal he will be cleared of all charges,” attorney Nenye Uche told reporters. “This is an inconsistent verdict. .. I don’t believe that justice was done today.”

Uche said he had “never seen a case like this where a person got jail time,” but added “he shouldn’t because he’s innocent.”

The defense rested its case on Tuesday after a week of testimony, with Smollett taking the stand in his own defense. He alleged Abimbola and Ola Osundairo, the brothers who carried out the assault, were lying when they said during the trial that they were friends of Smollett and had been paid $3,500 to carry out the attack.

The charges were dropped against Smollett in March 2019, but a special prosecutor announced an indictment for the six disorderly conduct charges was handed down in February 2020. Smollett pleaded not guilty.

The jury deliberated for about three hours on Wednesday and then began again on Thursday morning.

Gloria Rodriguez, lawyer for the Osundario brothers, said the brothers were elated with the verdict and thanked the special prosecutor for taking on the case.