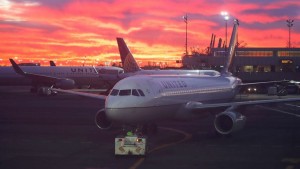 (ABC News) –The transportation industry has been bracing for pre-pandemic-level crowds this holiday season, but now two major U.S. airlines have been forced to proactively cancel some Christmas Eve flights due to the fast-spreading omicron variant of COVID-19.

As of Thursday evening, United Airlines has proactively cancelled 112 flights for Christmas Eve.

“The nationwide spike in omicron cases this week has had a direct impact on our flight crews and the people who run our operation,” United said in a statement. “As a result, we’ve unfortunately had to cancel some flights and are notifying impacted customers in advance of them coming to the airport.”

“We’re sorry for the disruption and are working hard to rebook as many people as possible and get them on their way for the holidays,” the airline added.

And it’s not just United that’s feeling the impact of the variant on crews.

Delta Air Lines also proactively canceled around 90 flights for Christmas Eve. The airline says the “flight cancellations are due to a combination of issues, including but not limited to, potential inclement weather in some areas and the impact of the omicron variant.”

“Delta teams have exhausted all options and resources — including rerouting and substitutions of aircraft and crews to cover scheduled flying — before canceling around 90 flights for Friday,” Delta said in a statement to ABC News. “We apologize to our customers for the delay in their holiday travel plans. Delta people are working hard to get them to where they need to be as quickly and as safely as possible on the next available flight.”

Airlines for America (A4A), the group that lobbies on behalf of all major U.S. airlines, is calling on the Centers for Disease Control and Prevention to shorten the quarantine time for fully vaccinated individuals, saying the omicron surge may create “significant” disruptions.

“The omicron surge may exacerbate personnel shortages and create significant disruptions to our workforce and operations,” Nick Calio, A4A’s CEO, said in a letter on Thursday to CDC Director Rochelle Walensky.

Calio proposed the isolation period to be shortened to five days from symptom onset for breakthrough infections.

“In turn, those individuals would be able to end isolation with an appropriate testing protocol,” Calio wrote.

The letter comes after Delta Air Lines and JetBlue Airways, both A4A members, also asked for isolation periods for fully vaccinated individuals to be shortened.

Consumer News: Tips for navigating vacation planning with the unknown of the pandemic