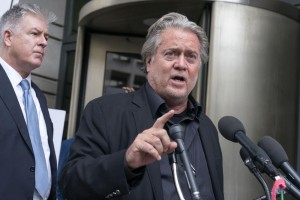 Washington, DC (ABC)–Steve Bannon has been found guilty on two counts of contempt of Congress.

Count 1 is for failing to appear for a deposition in October 2021, and carries a maximum sentence of one year behind bars.

Count 2 is for refusing to provide records by the October 2021 deadline. It also carries a maximum one-year sentence.

Steve Bannon, who served as former President Donald Trump’s chief strategist before departing the White House in August 2017, was on trial for defying a subpoena from the House select committee investigating the Jan. 6 attack on the U.S. Capitol.

Bannon was subpoenaed by the Jan. 6 panel for records and testimony in September of last year.

After the House of Representatives voted to hold him in contempt for defying the subpoena, the Justice Department in November charged Bannon with two counts of criminal contempt of Congress, setting up this week’s trial.