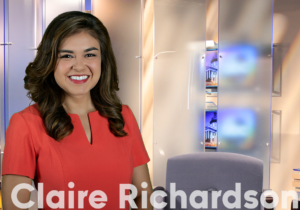 Claire Richardson joined the ABC Columbia team in June of 2018.

She comes to the Midlands from the Shenandoah Valley where she worked for 3 years as a producer and morning anchor at WHSV in Harrisonburg, Virginia.

Claire earned her college degree at Trinity University in San Antonio, Texas, majoring in Communications. In San Antonio, she began her career as an associate producer at WOAI.

As a military “brat” Claire was born in Tokyo, Japan and lived there until her family’s move to Stuttgart, Germany, where she graduated from high school.

She is so excited to call Columbia her new home!

You can catch Claire weekday mornings from 5 to 7 a.m. on Good Morning Columbia, as well as the News at Noon.

It's National Library Week, and Richland Library is reflecting on some of the initiatives and resources put in place to help the community since the buildings were closed due to the pandemic.

Lexington native, Marley Stokes is the newly crowned Miss South Carolina USA. She will go on to represent the Palmetto State at the Miss USA Pageant.

Registration is now open for a free bridal expo in Columbia next month.