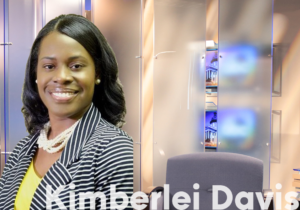 As the first person in the role, she serves as the senior editor, producer and reporter for digital content by developing and implementing a multi-screen strategy for the web, app and social-media platforms.

In addition, Kimberlei trains in digital, mobile and social reporting tools and techniques as well as writes breaking news stories and launched the digital segment on what’s trending.

Among other degrees, the United States Army Reserve veteran, has a B.A. in Journalism from Johnson C. Smith University.

With more than 18 years of professional experience, she has worked as a radio host, public relations executive and print news writer and columnist.

She is a member of the Southeast Chapter of The National Academy of Television Arts & Sciences and currently serves on the Regional Emmy® Awards peer judging panel.

Her directorial debut as a filmmaker came with the soon-to-be released holiday short, ‘The Christmas Watch.’

Kimberlei and her son, Benjamin, serve as spokespersons for the South Carolina Chapter of the March of Dimes and as a miracle family for Prisma Health Children’s Hospital and the University of South Carolina’s Dance Marathon.

They are the co-authors of the children’s book, The Day Dennis Lost His Whoo!

Since 2009, Kimberlei spearheads the recognition of student achievement through her monthly giveaway Kim’s Kids all made possible through her non-profit The LEAP Foundation.

Kimberlei is a member of the 2020 United Way of the Midlands Blueprint for Leadership Class.

In 2019, she was selected in the fourth class of the Clyburn Fellowship and the inaugural class of The Talented Tenth SC’s DuBois Fellowship. In 2018, Kimberlei was named as one of South Carolina’s Black Pages Top 20 Under 40.

Professionally she is a member of Prisma Health’s Patient and Family Advisory Council and the South Carolina Chapter of the Alzheimer’s Association as a Congressional Team Member.

Kimberlei is also a member of Delta Sigma Theta Sorority, Incorporated, Jack and Jill of America, Incorporated, The Links, Incorporated and the National Association of Black Journalists. She is the host of the digital series Candid with Kimberlei.

She’s been honored by the Nu Tau Omega Chapter of Alpha Kappa Alpha Sorority, Incorporated and schools within Orangeburg County School District for her award-winning work in journalism.

TEMECULA, Calif. -- The mayor of a Southern California city resigned following an email in which he stated he didn’t “believe there’s ever been a good person of color killed by a police officer" locally. Temecula Mayor James Stewart had…

The Emergency Ordinance declaring a daily curfew in the City of Sumter has been lifted as of today.

Caught on Camera: Agitator behind bars on charges of inciting a riot, Sheriff Lott said

A 20-year-old man is behind bars charged with inciting a riot and aggravated breach of peace.