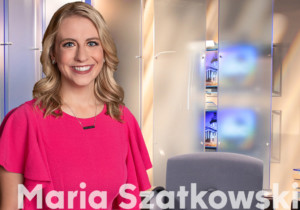 Maria Szatkowski arrived at ABC Columbia in July 2019 as a reporter. She comes to Columbia from WSAW in Wausau, Wisconsin; where she spent several years as the weekend anchor/producer and reporter. Prior to anchoring weekends and reporting, she was the producer for WSAW’s morning show ‘Sunrise 7.’

While in Wisconsin, she was able to cover a range of stories; including the safe return of Jayme Closs in Barron Co., President Trump’s historic stop in north central Wisconsin, the area’s record snowfalls and cold temperatures, and the Never Forgotten Honor Flight to Washington, D.C.

She was recognized with a 2018 award for ‘Best Live On-Scene Reporting’ from the Wisconsin Broadcasters Association (WBA). She also received a 2017 Eric Sevareid Award from the Midwest Broadcast Journalists Association for her coverage of the Never Forgotten Honor Flight. As a producer, she was awarded a 2017 first place for ‘Best Morning Newscast’ from the WBA.

An honors graduate from Loyola University Chicago degreed in Broadcast Journalism, Maria also acquired minors in both Italian language and Asian literature. Altogether she has studied five languages, including Arabic and Japanese, she claims greater fluency in Italian.

​Maria is a Detroit native and a huge fan of their sports teams, most notably the Detroit Lions and Michigan Wolverines. Go Blue!
In her spare time, Maria loves to travel (especially to Italy to visit family), as well as eat pizza and watch Star Wars.

Managing your mental health during pandemic and protests

Columbia, S.C. (WOLO) --- There's a lot going on in our world right now, between the coronavirus pandemic, George Floyd's death and the protests all over the world. All of this…

Columbia, S.C. (WOLO) --- Tuesday brought another day of protests in downtown Columbia, as people continue to honor George Floyd and other unarmed African Americans who have been recently killed. Day four of…

A look at Monday's Protests in Columbia, peaceful protest at State House

COLUMBIA, SC (WOLO)-- Tuesday, there were no planned organized events at the State House, although a few protesters took to the sidewalk, peacefully, holding signs. On Monday the scene was different, it marked the…

COLUMBIA, SC (WOLO)--We are now in day three of protests in Columbia, following the death of George Floyd. ABC Columbia’s Maria Szatkowski has been covering the protests all weekend and has been out there…

A look at Saturday's violent protest in Columbia

Columbia, S.C. (WOLO) --- Richland County Sheriff's deputies have released more information on Saturday's protest in Columbia that turned violent. The protest began peacefully, with a march to the State House from City Hall. Thousands listened as speakers talked about…