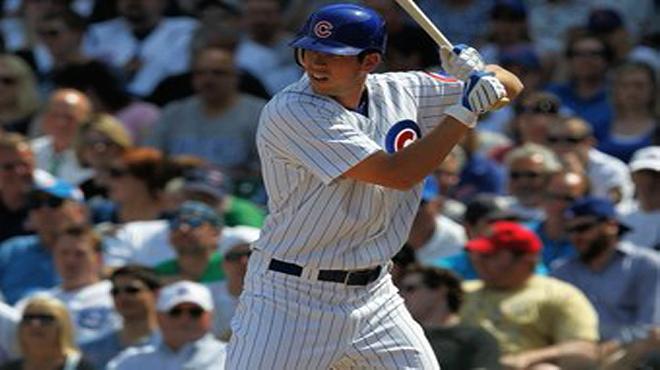 CINCINNATI (AP) — The Cubs are giving outfielder Tyler Colvin a chance to try to work out of his hitting funk in the minor leagues. Chicago optioned the struggling outfielder to triple-A Iowa on Tuesday before the second game of a series against the Cincinnati Reds. The Cubs called up outfielder Tony Campana to take his spot. They also swapped relievers, replacing Marcos Mateo with Scott Maine. Colvin, the 13th overall pick in the June 2006 draft, had one of the best rookie seasons in Cubs history last year, hitting 20 homers and driving in 58 runs in 135 games. The 20 homers were the fourth-most by a Cubs rookie. The Cubs expected him to be a fixture in the lineup this season, but he struggled during spring training and was batting .113 with two homers when he was sent down. “We thought in January he would play as much as anyone,” general manager Jim Hendry said. “He put himself in this spot. He didn’t produce. He had a very poor spring compared to what he did last year, but I think it’s still there. When you get in a funk, sometimes it takes a while to get out of it. “So he can be back in two or three weeks. I think long-term he’s an everyday guy. Nobody’s down on him for the future. Nobody’s looking to get rid of him. It’s just one of those growing-pain things.” The 24-year-old Campana was stunned by his promotion. He grew up in Springboro, Ohio, about 35 miles north of Cincinnati. He was a 13th-round pick out of the University of Cincinnati in 2008, and thought he might get called up in September. He and Maine flew in together. Campana’s parents picked them up at the airport and drove them to Great American Ball Park, where dozens of his relatives and friends were on hand for the game. “Getting to come home to play is a dream come true,” the five-foot-eight, 165-pound outfielder said. “It’s everything anybody wants.” Campana grew up a Cleveland Indians fan but attended numerous games at Riverfront Stadium and Great American, sitting up in the cheaper seats. He had his own cheering section near the Cubs dugout Tuesday. Campana said he left 50 tickets and couldn’t keep up with all the calls and congratulatory text messages. “It’s gotten out of control,” he said. “At one point, I just had to turn off the phone because it was getting out of control.” Campana is fast and can play all three outfield positions, so his role initially will be to come off the bench late in games. Hendry decided to change his bullpen after a 7-4 loss to the Reds on Monday night, when Cincinnati scored seven times in the sixth inning off Carlos Zambrano and Mateo. The loss dropped the Cubs a season-low five games below .500 at 17-22. Mateo came in and threw a wild pitch to Jonny Gomes that let in the go-ahead run. Then, he served up a two-run homer by Gomes, who hadn’t hit one in a month. Mateo was 1-1 with a 5.74 ERA in 20 appearances. “I was a little disappointed in Mateo from the consistency point of view,” Hendry said. “I didn’t think he was ready to pitch to the level we needed him to last night.” Maine made his major league debut last season and had a 2.08 ERA in 13 outings. He was 2-1 with seven saves and a 2.84 ERA at Iowa this season.