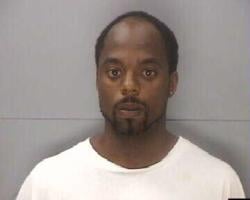 Columbia, SC (WOLO)– A man accused of threatening teens and their families to get them to join his gang is in custody. Sheriff Leon Lott says the department’s fugitive task force arrested Timothy Kinlaw at 9:30 Wednesday night at a family member’s home at Palmetto Terrace Apartments. Lott says Kinlaw, a self-admitted gang member, told his victims that if they didn’t join his gang that he and fellow gang members would conduct drive by shootings at their homes.