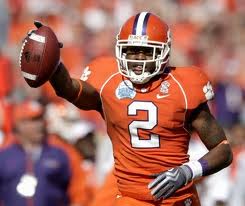 Clemson, SC — Undrafted NFL free agent and former Clemson safety DeAndre McDaniel tweets that he has agreed to terms with the New Orleans Saints Many draft gurus, like Mocking The Draft considered McDaniel to be a third- or even second-round talent before the draft, but he somehow went seven rounds without being picked. A wrist injury might have caused some teams to sleep on McDaniel. “They felt like I was going to need surgery and miss (2011),” McDaniel said. “I got it checked at the combine, but when I went back for a recheck the weekend of (Clemson’s) spring game, everyone was seeing that it was still fractured.” McDaniel’s mediocre 4.6-second 40-yard dash also might not have helped, and then there’s the fact that he was arrested for aggravated assault and battery a few years back. But based on some of the glowing scouting reports he gets, it sounds like the Saints might have gotten a real bargain here, given his instincts and on-field leadership skills.