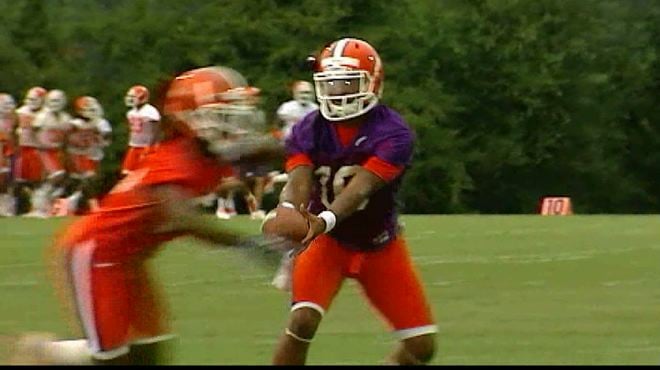 CLEMSON, SC (CLEMSON SID) — Clemson tight end Dwayne Allen had so much anxiety before the start of fall camp Friday he admitted he was a little antsy. But, all the emotion and build up for the 2011 football camp finally came to a close when the Tigers took to the practice fields behind the Jervey Athletic Center at 5:45 p.m. Despite a rain storm that moved them inside for a brief time, the Clemson football team practiced for two-and-half hours as they prepare for the season opener on September 3 against Troy. “I wanted to get out here,” Allen said. “My anticipation was high. Tonight was the best first day of camp we have had since I have been here.” Clemson Head Coach Dabo Swinney and his staff centered Friday’s practice around installation of the offense and defense, techniques and working on the fundamentals. “Right now, practice is all mental,” Swinney said. “The physical part of it will start creeping in here in a couple of days when we can go shells the third and four day, and then full pads on the fifth day. “So right now we are just mentally trying to install stuff and then coach the fundamentals and techniques, while we get a feel for our personnel. We need to get people knowing where they are supposed to go, while also teaching them how to practice the right way.” One guy Swinney and company did not have to teach how to practice was junior running back Andre Ellington. The Tigers’ top returning rusher returned to the practice fields in a healthy state for the first time since he injured his foot last year at Boston College. (He did carry the ball once in three plays against South Carolina in the final regular season game.). Ellington had surgery on his foot in the off-season and sat out all of spring practice as a result. Swinney said his star tailback, who is Clemson’s career leader in yards per carry (6.33, yes even higher than C.J. Spiller) looked like his old-self again as he slashed and dashed his way through traffic all evening. “I’m 100-percent (healthy),” Ellington said. “I moved pretty well out there and I made some cuts that I’m used to making. It felt great.” Ellington admitted he was in the best shape of his career coming into camp, which seemed to be the case for a lot of the guys. When he reported to camp Thursday, Ellington weighed in at 194 pounds, while Allen was 258. Quarterback Tajh Boyd came in at 222 pounds, while right tackle Landon Walker was 301 and center Dalton Freeman was 285. Even defensive tackle Brandon Thompson was down to 301 pounds after playing around 320 pounds last season. “I really like the way our football team looks,” Swinney said. “We don’t play this game in shorts, but we have a good looking bunch. We have a bunch of guys where it is obvious they have worked really hard and were prepared for today. “I’m proud of the guys for the way they started, but again, we have a lot of work still to do.” The Tigers will get back out on the practice fields on Saturday for another two-and-half hour practice starting at 4:55 p.m. Practice is closed to the public.