Tigers Tee It Up For First Time In Full Pads 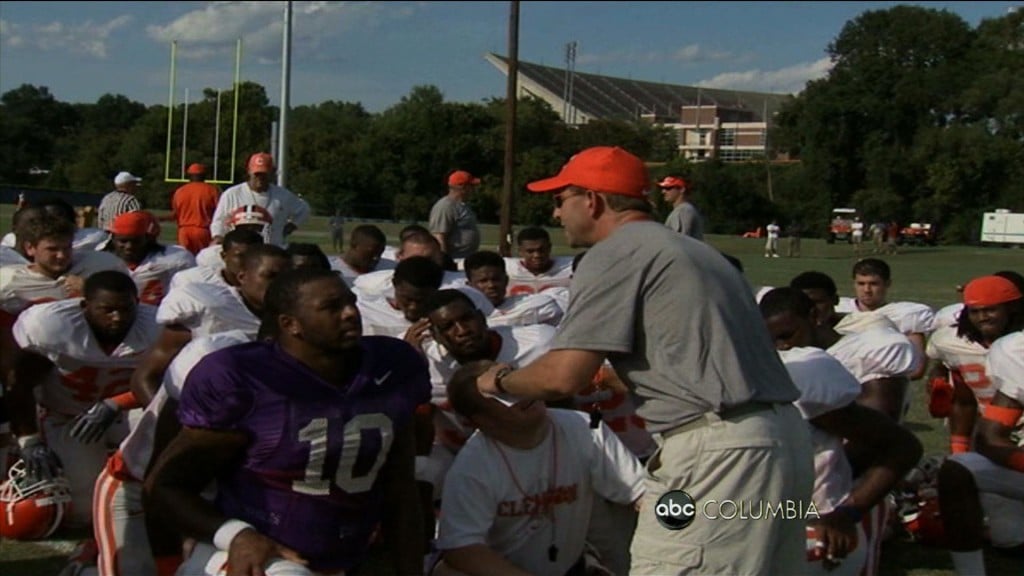 CLEMSON, S.C. (CU SID) — Clemson held its fifth practice of the preseason, but its first in full gear on Wednesday afternoon. The Tigers worked for two-and-a-half hours under a hot sun, but with comfortable humidity. The Tigers are preparing for the season opener against Troy on September 3. “It was a good first day in pads,” said Clemson Head Coach Dabo Swinney who is in his third year directing the Clemson program. “The team responded and they were focused. “We spent a lot of time working in the red-zone and that will be an area of emphasis the entire preseason. That is an area we must improve this year. We lost five games by six points or less last year and had we been more efficient in the red-zone we would have had a better record. “We also worked a lot on short yardage situations, third-and-one, third-and-two situations. You have to keep the chains moving in this offense and obviously getting off the field defensively when you have short yardage is just as important.” Swinney was impressed with the performance of his young players in their first practice in full pads. “The freshmen reacted with maturity, that was good to see. They did not back down. We have some young players who are ready to play physically, they obviously need more experience in the other phases of the game, but they will pick that up. “One player who stood out today was Tavaris Barnes (DT). He was very active and made some big plays (including an interception on a tipped pass). He is a young player who can help us this year, he just needs to be more consistent.” One area the young players will make a big contribution this year is special teams. “Mike Bellamy and Sammy Watkins were the two fastest players in Florida last year and they will obviously help us in the return game. We have some other freshmen who will contribute in that area as well.”

Swinney also commented on the offensive line’s progress on Wednesday. “Joey Batson (strength coach) has done an outstanding job with our offensive line this summer. The tempo of our offense is very important and the line’s conditioning is so key to that execution. They all look in outstanding shape to run this fast tempo attack.” The only Tiger who was in a yellow jersey on Wednesday was starting senior defensive tackle Rennie Moore, who “tweaked a knee” in Tuesday’s practice. He ran on the side on Wednesday and is expected back at practice by the end of the week. Clemson will practice once on Thursday and twice on Friday before holding its first scrimmage of the preseason on Saturday morning. All practices are closed to the public.