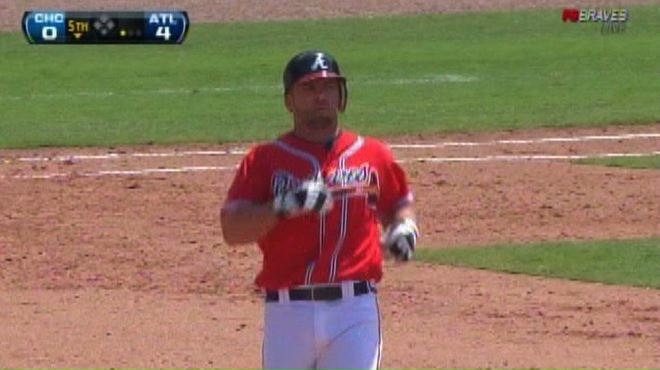 ATLANTA (AP) — Braves second baseman Dan Uggla’s 33-game hitting streak, the longest in the majors in five years, ended when he was 0-for-3 in Sunday’s 6-5 loss to the Cubs. Uggla’s best chance to extend the streak came in the fifth when second baseman Darwin Barney made a diving catch of his fly ball to shallow right field. Uggla grounded out to shortstop against Jeff Samardzija in the seventh. The streak was the longest in the majors since Philadelphia’s Chase Utley and Jimmy Rollins had 35- and 38-game streaks in 2006. Rollins’ streak began late in 2005. Uggla streak passed Rico Carty’s 31-game streak in 1970 as the longest in Atlanta Braves history. The franchise record is 37 games by Tommy Holmes for the 1945 Boston Braves.