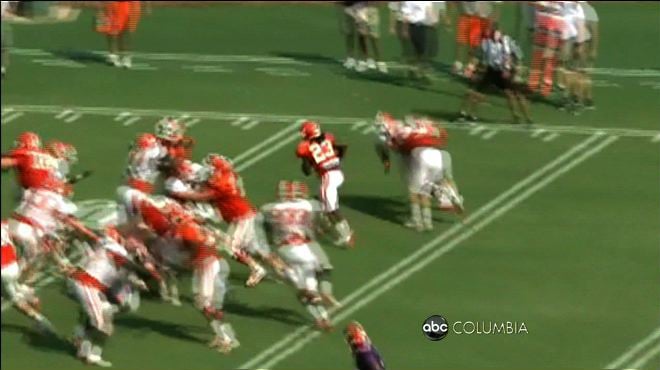 CLEMSON, SC – Clemson’s first-team defense was much improved from last Wednesday, thanks to the play of senior Andre Branch in a scrimmage at Memorial Stadium on Saturday morning. Dabo Swinney’s Tigers are preparing for the September 3 season opener with Troy, a program that has won five straight Sun Belt Conference titles. Andre Branch led the first unit defense that allowed just one touchdown and that came in an overtime simulation. Branch, who is the top returnee in terms of quarterback sacks, had three tackles for loss, including a sack. Malliciah Goodman added two sacks from his defensive end position, as he takes over for Da’Quan Bowers, who led the nation in sacks last year. Branch had four tackles, as did Justin Parker in the 75-play scrimmage. Jonathan Willard and Kantrell Brown had interceptions for the defense, while Cortez Davis had a caused fumble. Tajh Boyd had a solid day on offense, hitting 8-14 passes for 108 yards and a touchdown, a 19-yard strike to red-shirt freshman tight end Sam Cooper. Boyd had one interception, his first of the August practice sessions in Memorial Stadium scrimmages. Backup quarterback Cole Stoudt, who played against the number-one defense the entire day, was 4-12 for 57 yards. He did connect with Brandon Ford on a 13-yard touchdown play. It was the third straight scrimmage that Ford caught a touchdown pass. The scrimmage opened with a 66-yard drive in nine plays for a touchdown by the number-one offense against the number-two defense. Andre Ellington had four carries for 37 yards on the drive, including a one-yard touchdown to culminate the drive. D.J. Howard was the top rusher in the scrimmage with 8-53, while Ellington finished with 4-37. He did not play after the opening drive. The passing game was balanced in terms of receivers. Fifteen different players caught at least one pass and no one caught more than two. Dwayne Allen and DeAndre Hopkins both had two catches for 29 yards. Stanton Seckinger might have had the top catch of the day with a 23-yard reception from Stoudt on the sideline. Will Harrison had the longest catch of the day on a 31-yard reception from Tony McNeal. The kicking game was solid as well as sophomore kicker Chandler Catanzaro was 6-6 kicking field goals and extra points. “This was a good scrimmage, we accomplished a lot of our objectives,” said Swinney. “No one got hurt and we went live the entire day. The defense responded today and that was good to see. They came back strong from last Wednesday. As a head coach it was a good day because neither side of the ball was dominant. There were not a lot of penalties and we played well as a team.” Swinney was impressed with Andre Ellington, who only played on the opening drive. “Ellington is a veteran. He works hard in practice every day. We have not held him back in any drills. He does the Oklahoma drill like everyone else. He is 100 percent. “We took a long look at D.J. Howard and Rod McDowell. We have some depth behind Ellington and Mike Bellamy will be back soon as well.” The Tigers will hold Fan Appreciation Day on Sunday from 4:30 PM to 6:30 PM, then have two practices on Monday and one on Tuesday before school opens on Wednesday. Sammy Watkins missed the scrimmage with a hip injury. He is expected to return to practice on Monday. Brandon Thompson and Mike Bellamy also missed the scrimmage with minor injuries and are expected to return on Monday. Running back Demont Buice missed the scrimmage with a foot injury. Starting offensive guard Antoine McClain missed the scrimmage due to death in his family and Bryce McNeal was out with the flu.