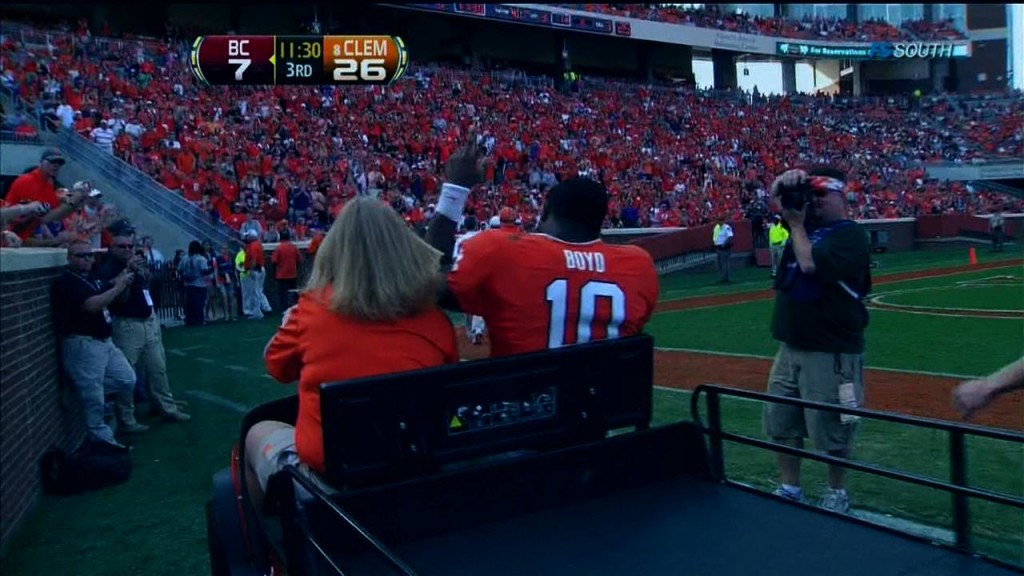 CLEMSON, S.C. (AP) — Clemson quarterback Tajh Boyd said Tuesday he has been cleared to practice with the strained hip he injured against Boston College that appeared more severe than it turned out. Boyd sat out Monday’s workout as he recovered from the hard hit by Eagles defensive end Max Holloway early in the third quarter of last week’s 36-14 Tigers’ victory. Coach Dabo Swinney said Boyd will get all the work with starters as the eighth-ranked Tigers (6-0, 3-0 Atlantic Coast Conference) prepare to take on Maryland this Saturday. Boyd said he’s not sore, although he experiences some stiffness in his left hip if he sits too long. “It was a little scary,” he said. “If you look at it, it definitely could have gone a lot of different ways. But fortunately, it turned out in my favor.” Boyd has a reputation for toughing out injuries. He tore a knee ligament in high school but played out the season before having surgery. He said teammates and friends have joked with since Saturday, saying that Boyd put on a big display when he was helped off the field and driving to the locker room for someone not hurt all that badly. “It’s something I’ll probably hear about the rest of my time here,” Boyd said with a laugh. Boyd has given the Tigers plenty to smile about this season. He leads the ACC in total offense and passing yards. He threw his 15th touchdown pass in the win over the Eagles and has just two interceptions halfway through the regular season. That all looked in doubt after he went down at Death Valley. Boyd tried to get up, but felt strong pain and slumped back down. Boyd said Holloway pushed his leg one way as the quarterback tried to escape in the opposite direction. “Honestly, I just felt like I couldn’t walk,” Boyd said. “It felt that bad.” Freshman backup Cole Stoudt finished the game at quarterback and took practice snaps with the starters on Monday. The Tigers have lost three of their past five games against Maryland (2-3, 1-1). They are attempting to start 7-0 for the first time in 11 years, something that could’ve been much more difficult with Boyd on the sidelines. “Obviously, the situation with Tajh could have been worse,” Swinney said. “But he’s fine.”