Clemson Comes Back To Beat Maryland 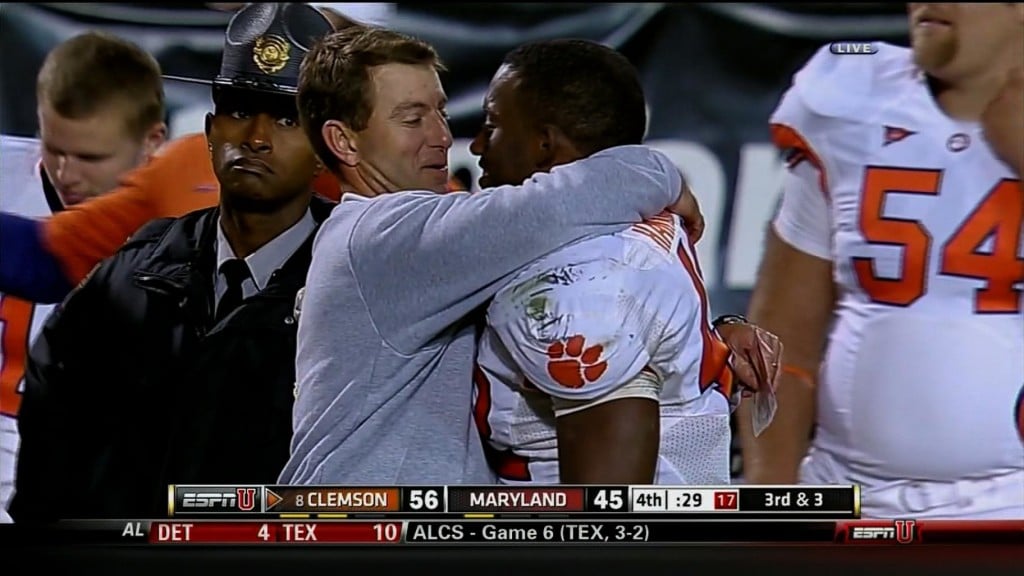 COLLEGE PARK, Md. (AP) — Tajh Boyd threw four touchdown passes, freshman Sammy and No. 8 Clemson rallied from an 18-point deficit against Maryland to remain unbeaten with a 56-45 victory Saturday night. The Tigers (7-0, 4-0 Atlantic Coast Conference) trailed 28-10 late in the first half and 35-17 in the third quarter before storming back behind Boyd, who went 26 for 38 for 270 yards as the catalyst of an offense that amassed 576 yards. Boyd had plenty of help. Watkins scored on an 89-yard kickoff return that put Clemson up 49-45 with 7:24 left. Watkins returned an earlier kickoff 70 yards, and his 345 all-purpose yards set a school record. Andre Ellington rushed for a career-high 212 yards and two touchdowns for the Tigers, who have scored at least 35 points in all but one game this season. Maryland (2-4, 1-2) provided Clemson with an enormous scare behind sophomore quarterback C.J. Brown, who ran for 162 yards and a touchdown and threw three scoring passes in his first college start. Terrapins first-year coach Randy Edsall waited until just before the game to pick Brown as his starter over Danny O’Brien. Brown did everything but win the game. In addition to his rushing total, he completed 17 for 35 passes for 177 yards. But Clemson had too much offense for the Terps to overcome. After Brown threw a 32-yard TD pass to tight end Matt Furstenburg to put Maryland up 45-42, Watkins took off on his decisive kickoff return and Ellington clinched it with a 44-yard touchdown run with 3:55 to go. The Terrapins took their second 18-point lead early in the third quarter when Brown capped a 78-yard touchdown drive with a 22-yard pass to Furstenburg. Boyd responded with a 13-yard TD pass to Watkins to make it 35-24. After each team kicked a field goal, Boyd connected with Watkins for 51 yards, ran for 4 and threw a 15-yard touchdown pass to Watkins. The 2-point conversion got Clemson to 38-35 entering the fourth quarter. The comeback became complete when Boyd threw a 12-yard touchdown pass to Jaron Brown with 11:26 left to end an 80-yard drive. Clemson would be forced to rally again, but Boyd, Watkins and Ellington were up to the challenge. Maryland led 28-17 at halftime, but left the field lamenting several missed opportunities. The Terrapins dropped two potential interceptions, and Ronnie Tyler muffed a long pass late in the second quarter inside the Clemson 25. The Tigers opened the game with a 95-yard drive but had to settle for a field goal. Maryland then punted, but Watkins dropped the kick and the Terrapins recovered. Two plays later, Davin Meggett ran in from the 9. A second turnover produced a second Maryland touchdown, this one a 46-yard interception return by Cameron Chism that made it 14-3. But Watkins took the subsequent kickoff 70 yards to the Maryland 30. That set up a 3-yard touchdown run by Ellington, who had 81 yards on 12 carries in the first quarter. The Terrapins then let their offense do some work, and Brown complied. He threw a 40-yard pass to Furstenburg, then completed the 70-yard march with a 7-yard pass to Meggett. Clemson punted again, and Brown ran for 47 yards in a 70-yard drive, including a 21-yard sprint to the end zone for a 28-10 lead. Not to be outdone, Boyd passed and ran for 69 yards during a 73-yard march that ended with his 6-yard touchdown pass to DeAndre Hopkins.