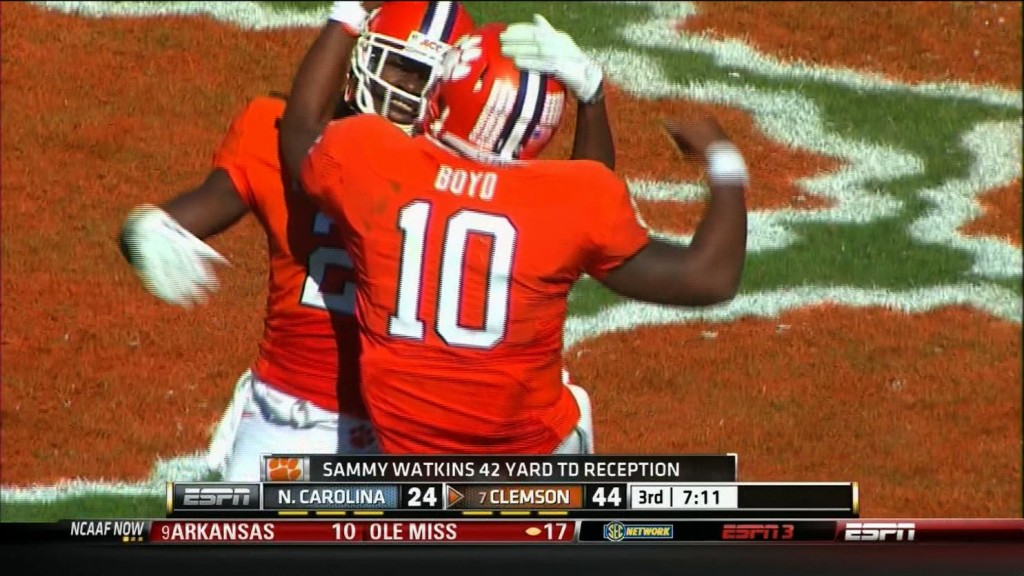 CLEMSON, S.C. (AP) — Clemson right tackle Landon Walker soaked in his weekend around the Tigers’ 1981 national champions and couldn’t believe how similar this team is to those long-ago title winners. Clemson (No. 7 BCS, No. 8 AP) could have even more in common with its revered champs if it keeps playing like this. Tajh Boyd tied a school record with five touchdown passes, defensive end Kourtnei Brown scored on interception and fumble returns and Clemson improved to 8-0 for the first time in 11 years with a 59-38 victory over North Carolina on Saturday. The weekend was a celebration of the football program’s benchmark achievement with several stalwarts from that group returning to Death Valley. Walker said 1981’s defensive leader Jeff Davis and receiving star Perry Tuttle spoke to the younger Tigers on Friday night about what they had already accomplished and what could be ahead. It opened Walker’s eyes. “They were talking to us about how our team is a lot like the ’81 team,” Walker said. “And that’s special.” While the ’81 group thrived on defense and rushing, these latest Tigers (5-0 Atlantic Coast Conference) live with a high-flying offense that again blew past its opponent. Clemson scored 39 points in the second half a week ago to overcome an 18-point deficit and defeat Maryland 56-45. This time, the Tigers put up a 35-point third quarter — matching the feat of the 1981 champs, who had been the only Clemson team with that distinction and scored 35 points in the second quarter of an 82-24 win over Wake Forest in its 12-0 season. “Any time you can resemble a national championship team,” Walker said. “There’s a lot of excitement in the air about that.” Just as there was in 2000, the last time Clemson reached 8-0. But a week later, the Tigers were beaten by Georgia Tech and began a 1-3 slide to the finish. Clemson’s next opponent? Georgia Tech. “We have to empty the tank this week in practice and then leave it all on the field at Georgia Tech,” Tigers coach Dabo Swinney said. The Tigers again put on an offensive display with 450 yards as Boyd matched Cullen Harper’s 2007 mark. Brown’s game was a reminder of the great 1981 defense, which along with Davis featured stars like safety Terry Kinard and defensive tackle William “Refrigerator” Perry. North Carolina (5-3, 1-3) turned the ball over six times and tailback Giovani Bernard was held to 44 yards, ending his streak of five consecutive games with 100 yards rushing. “Turnovers kill you,” North Carolina coach Everett Withers said. “They take momentum away from you, they take energy away from you, they take energy out of you, they take emotion out of you.” Clemson’s DeAndre Hopkins had nine catches for a career-best 157 yards and standout freshman Sammy Watkins had eight receptions for 91 yards. Both also caught touchdowns from Boyd, who connected with five separate receivers in his record-tying performance. But it took Brown’s nose for the end zone to get the Tigers on track. They were ahead only 17-10 and had struggled to move the ball against North Carolina’s defense when Brown took Bryn Renner’s swing pass attempt 20 yards for the score to extend the lead. The Tigers had already blown the game open when Brown scooped up Renner’s fumble and took it 26 yards for a touchdown that made it 59-24, Clemson. No Tiger defensive lineman had scored twice in a game since Walt Laraway had an interception and a blocked punt return for TDs against the Citadel in 1954. “It’s hard to describe the feeling,” Brown said. “I was happy to help my team out and get some points on the board. But at the same time, it felt good. Boyd was 27 of 46 passing for 367 yards, his fourth game this season over 300 yards. He also had a 1-yard touchdown run to start Clemson’s big third quarter. The Tar Heels defense — third in the ACC in points allowed per game — proved stingier than the Terps early on. Linebacker Zach Brown had two drive-killing sacks of Boyd in the first quarter — the Tigers had given up only 13 all season — and then knocked down a ball in coverage that looked like it would lead to a Watkins TD catch. North Carolina also stuffed Clemson’s run game, limiting the Tigers to 15 yards on the ground the first two quarters. The Tar Heels, though, couldn’t really figure things out on offense. They gave up three turnovers, though a pair of quick touchdowns by Jheranie Boyd kept them in the game. When Renner was bad, he looked awful. He was intercepted by Jonathan Meeks on North Carolina’s first drive to set up a 37-yard field goal by Clemson’s Chandler Catanzaro. Renner gave the Tar Heels hope of a comeback after Kourtnei Brown’s interception score when he connected with Jheranie Boyd on a 58-yard touchdown pass that cut the lead to 24-17 at the half. But the Tigers, inspired when they came out for the third quarter through two rows of the 1981 championship team, quickly put the game away. “That reminded us what we’re playing for,” said Walker, Clemson’s tackle. Clemson tailback Andre Ellington, who rushed for 212 yards and two touchdowns against Maryland, was held to 7 yards rushing. He spent time on the sidelines as trainers examined his left foot opening half, but continued to play. Ellington had a foot injury that kept him out for most of the final five games of 2010. T.J. Thorpe had a 100-yard kickoff return, the second in North Carolina history, to cut the lead to 38-24. But the Tar Heels didn’t score again until Ryan Houston’s two fourth-quarter TDs after Clemson had gone up 59-24.