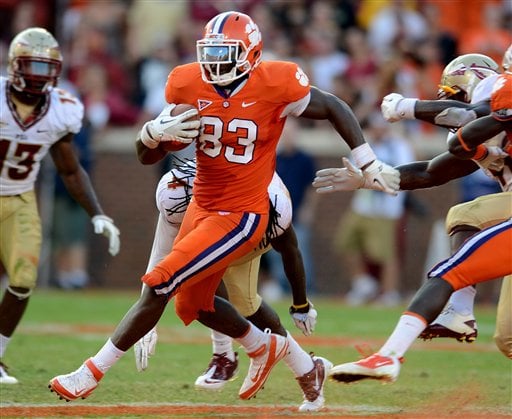 CLEMSON, S.C. (CLEMSON ATHLETICS) —Clemson tight end Dwayne Allen was named to the Football Writers Association All-American team on Saturday. It has been quite a week for Allen, who was named the winner of the John Mackey Award on Thursday. Allen was the only ACC player on the Football Writers Association All-American team on offense. Luke Kuechly, the ACC defensive player of the year, was the only ACC player on the defense. Allen has 48 receptions for 577 yards and eight touchdowns this year, Clemson records in all three areas for a tight end. He had two touchdown receptions in the ACC Championship victory over Virginia Tech on December 3. He broke Bennie Cunningham‘s Clemson record for a tight end when he caught his second touchdown pass of that game. The native of Fayetteville, NC has 12 touchdown receptions for his career, tied for the Clemson record for a tight end. His 94 career receptions are the most in Clemson history for a tight end. Three Clemson players have now been named to various All-America teams. Allen has been named first team by Football Writers and second-team by CBS Sports. Sammy Watkins was named a first-team All-American by Rivals.com earlier on Saturday. Andre Branch has been named a second-team All-American by the Walter Camp Foundation, Rivals.com, College Football News, and CBS Sports.