Swinney National Coach of the Year 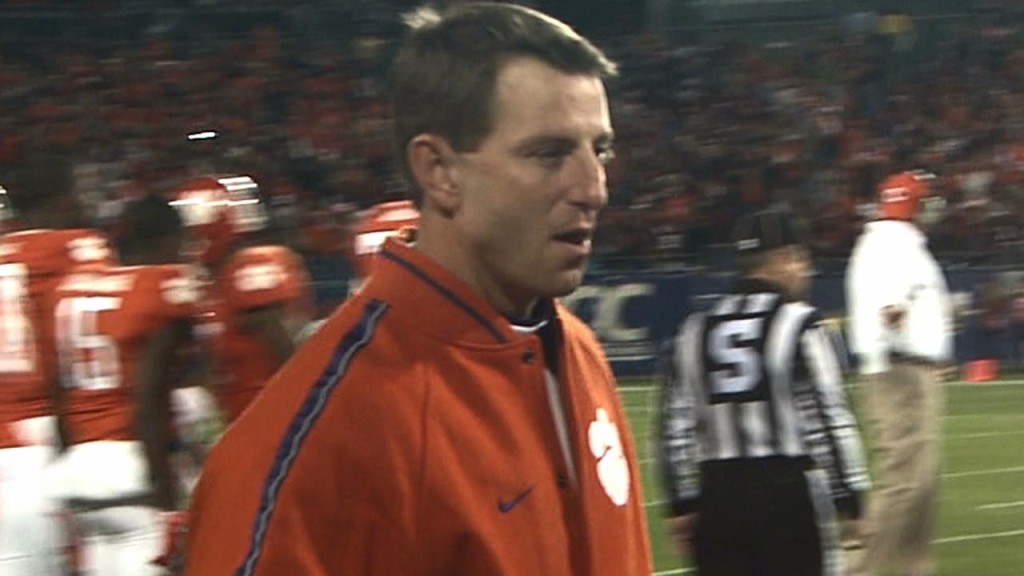 Clemson, SC (Clemson Athletics)—Clemson Head Football Coach Dabo Swinney has been named the winner of the Bobby Dodd Award as the FBS National Coach of the Year. The announcement was made tonight at halftime on ESPN at the Chick-Fil-A Bowl game between Auburn and Virginia. Swinney is the first Clemson football coach to win a National Coach of the Year honor since 1981 when Danny Ford was named National Coach of the Year by the American Football Coaches Association and the Football Writers Association. Ford coached Clemson to the National Championship during that 1981 season with a 12-0 record, including a 22-15 win over Nebraska in the Orange Bowl. Now Swinney will coach the Tigers in the Discover Orange Bowl on Wednesday night. It is Clemson‘s first visit to the Orange Bowl since that game at the conclusion of the 1981 season. “This is a great honor,” said Swinney. “I accept this award on behalf of our players, coaches and everyone affiliated with our program at Clemson. I am proud of what we have accomplished this year and we hope to add to that this week. “It is an honor to win an award named after the legendary Bobby Dodd, who did so much for college football. I am humbled to be the recipient of this award.” Swinney is the first Clemson coach in any sport to win a national coach of the Year honor since Larry Penley was the unanimous National Coach of the Year of college golf in 2003 when the Tigers golfers won the National Championship. This season Swinney has coached Clemson to its first ACC Championship in 20 years, its first 10-win season in 21 years, and its first bid to the Orange Bowl since 1981. The Tigers have a 10-3 record entering Wednesday‘s Discover Orange Bowl game against West Virginia. The Tigers have four wins over top 25 teams this year, a school record for one season and tied for second most in the nation this year. The Tigers could gain a fifth with a victory over the Mountaineers. Included in the list of wins over ranked teams are a pair of wins over Virginia Tech, a 23-3 victory in the regular season over a 10th ranked Virginia Tech team in Blacksburg, and a 38-10 win over the third ranked Hokies in the ACC Championship game on December 3. That victory tied for the highest ranked team Clemson has defeated in its history. Clemson is ranked 14th in AP and 14th in USA Today entering the bowl season and had a #15 ranking in the final BCS poll, tying Clemson‘s best final ranking in the BCS. The Bobby Dodd Coach of the Year Award is annually presented to the Football Subdivision head coach whose team excels on the field, in the classroom and in the community. The award is named for Bobby Dodd, the longtime head coach at Georgia Tech. It was established in 1976 to honor the values that Dodd exemplified. The Dodd selection committee is composed of college football media experts, and previous winners. Clemson Coaches to Be Named National Coach of the Year Year Coach Sport 1981 Chuck Kriese Men‘s Tennis 1981 Danny Ford Football 1986 Chuck Kriese Men‘s Tennis 1992 Bob Pollock Men‘s Indoor Track 2003 Larry Penley Men‘s Golf 2011 Dabo Swinney Football